This was the flag adopted by North Carolina after secession. It was carried by the North Carolina Regiments, along with the Confederate colors, throughout the Civil War. Below the star on this flag the date, May 20, 1861, indicates the day of North Carolina’s secession from the union.

Above the star is the date of the so-called “Mecklenburg Declaration of Independence” in 1776. This was a resolution of the citizens of Mecklenburg County, NC, to be sent to the North Carolina representatives at the Continental Congress, stating that they had separated from Great Britain.

After the Boston Tea Party, Britain closed the Port of Boston. On May 19th, 1775, the elected representatives of Mecklenburg County met at the courthouse in Charlotte and began discussing what to do regarding what had happened. On the same day an express rider arrived with news of the battles of Lexington and Concord. After hearing that British soldiers had killed and wounded fellow British citizens, the discussions swiftly became more intense, resulting in five resolutions that make up the Mecklenburg Declaration of Independence. It was not called a declaration at the time, but was a resolution of the citizens of Mecklenburg County. It was to be sent to the North Carolina representatives at the Continental Congress, declaring the fact that they had separated themselves from BritNorth Carolina Republic Double Nylon Embroidered Flag 3 x 5 ft.ain.

The citizens of Mecklenburg stated that Great Britain had “wantonly trampled on our rights and liberties and inhumanly shed the innocent blood of American patriots at Lexington” and that we “dissolve the political bands which have connected us to the Mother country” and declare ourselves “a free and independent people.”

This flag was issued to state troops in 1861 and used throughout the war. This flag continued in use until 1885, when North Carolina adopted a new design. 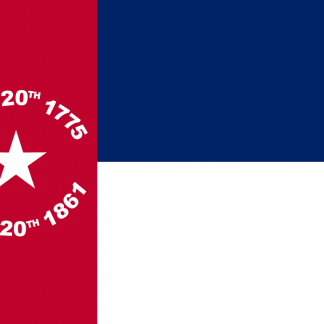