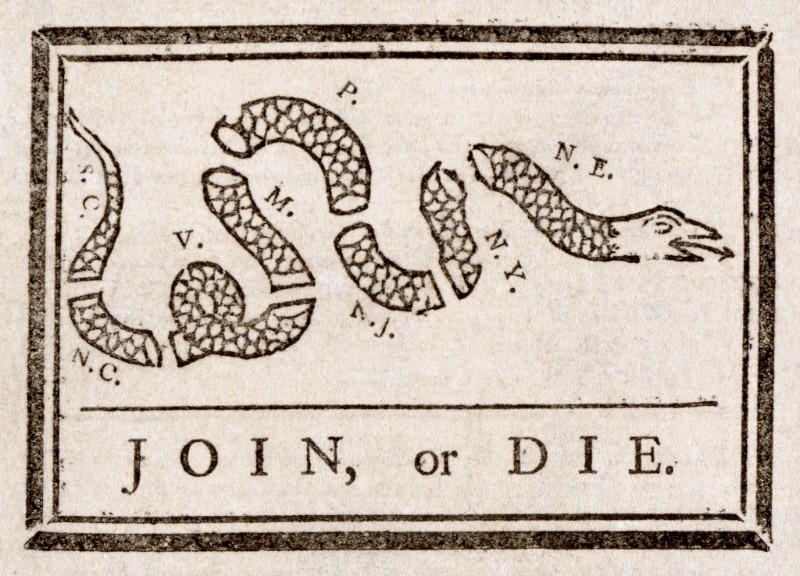 Rattlesnake – the First Symbol of America

It was December 1775. Fighting between the American colonists and the British had begun, but the Declaration of Independence was yet to come. Benjamin Franklin wrote a letter that was published in the Pennsylvania Journal under the  name “An American Guesser.” In the letter he compares the characteristics of the rattlesnake to the qualities of the new emerging America. 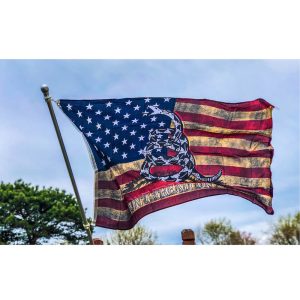 Here are excerpts from the letter with his brilliant observations:
“I observed on one of the drums belonging to the marines now raising, there was painted a Rattle-Snake, with this modest motto under it, ‘Don’t tread on me.’”

I know it is the custom to have some device on the arms of every country,…I sat down to guess what could have been intended by this uncommon device…”

Franklin’s research about the serpent found:

“The ancients considered the serpent as an emblem of wisdom, and in a certain attitude of endless duration…”  “It occurred to me that the Rattle-Snake is found in no other quarter of the world besides America, and may therefore have been chosen, on that account, to represent her.”

I recollected that her eye excelled in brightness, that of any other animal, and that she has no eye-lids. She may therefore be esteemed an emblem of vigilance. She never begins an attack, nor, when once engaged, ever surrenders: She is therefore an emblem of magnanimity and true courage.”

“She never wounds ’till she has generously given notice, even to her enemy, and cautioned him against the danger of treading on her.”

“Was I wrong, Sir, in thinking this a strong picture of the temper and conduct of America? The poison of her teeth is the necessary means of digesting her food, and at the same time is certain destruction to her enemies. This may be understood to intimate that those things which are destructive to our enemies, may be to us not only harmless, but absolutely necessary to our existence.”

“I confess I was wholly at a loss what to make of the rattles, ’till I went back and counted them and found them just thirteen, exactly the number of the Colonies united in America; and I recollected too that this was the only part of the Snake which increased in numbers.” 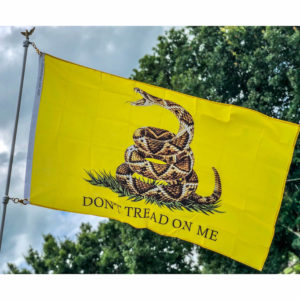 ‘Tis curious and amazing to observe how distinct and independent of each other the rattles of this animal are, and yet how firmly they are united together, so as never to be separated but by breaking them to pieces. One of those rattles singly, is incapable of producing sound, but the ringing of thirteen together, is sufficient to alarm the boldest man living.”

“The Rattle-Snake is solitary, and associates with her kind only when it is necessary for their preservation. In winter, the warmth of a number together will preserve their lives, while singly, they would probably perish.”

She strongly resembles America in this, that she is beautiful in youth and her beauty increaseth with her age, ‘her tongue also is blue and forked as the lightning, and her abode is among impenetrable rocks.’”

Within a year of this letter, the rattlesnake found its way onto one of the first American flags, the bright yellow Gadsden Flag, with the words, “Don’t Tread on Me.” Later on, the Continental Congress officially adopted the rattlesnake to serve as the nation’s first symbol, approving the design for the official Seal of the War Office.

The rattlesnake made its way onto famous flags of the Revolution, like the Gadsden and the Culpeper Minute Men. Rattlesnakes were seen on military drums, paper currency, and playing cards. In 1776 a British newspaper printed an image of the American First Navy Jack, displaying a rattlesnake.

The rattlesnake shown here was on the $20 bill issued in 1778 by Georgia. The Latin motto (Nemo me impune lacesset) means, “No one will provoke me with impunity.”

Brought to you by Ultimate Flags. We hope you enjoyed our post. Please share with all your friends on social media.