1st in, last out of Vietnam 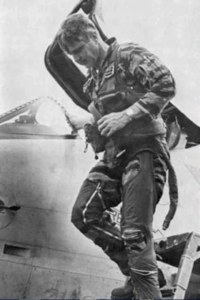 As Captain James Stockdale climbed into the cockpit of his A-4 Skyhawk on September 9, 1965, he could scarcely have imagined the seven years of hell that awaited him.

Stockdale’s plane was shot down over North Vietnam that day. He ejected, breaking his back and badly dislocating a knee when he fell to earth. Soon captured, he was beaten severely then sent to the now-infamous “Hanoi Hilton” prison. Over the next seven years he was submitted to brutal torture 15 times. Malnourished and denied medical attention, for four years he was kept in solitary confinement, and for two years in leg irons.

A graduate of the U.S. Naval Academy with a master’s degree from Stanford, Stockdale was the highest-ranking naval officer American POW in North Vietnam. A respected and natural leader, he organized a system of communication and support among his fellow POWs, helping to keep them unified and alive. (Meanwhile, back in the States, his wife Sybil was relentlessly lobbying the government on behalf of the POWs, eventually launching a highly effective public awareness campaign. A hero in her own right, she deserves and shall have a Dose of her own.)

When Stockdale learned in the spring of 1969 that the North Vietnamese were going to display him and other POWs to a selected group of foreign journalists, presumably as evidence of the good treatment they were receiving, he cut his scalp with a razor and beat himself in the face with a wooden stool so that he couldn’t be used for their propaganda.

Denied the opportunity to parade him before the press, his captors punished him with more brutal and agonizing torture. Later, when his covert intra-POW communication network was discovered, Stockdale was singled out for another round of torture. To prove to them that he would never submit, Stockdale slashed his wrists.

As his Medal of Honor citation reads: “He deliberately inflicted a near-mortal wound to his person in order to convince his captors of his willingness to give up his life rather than capitulate. He was subsequently discovered and revived by the North Vietnamese who, convinced of his indomitable spirit, abated in their employment of excessive harassment and torture toward all of the Prisoners of War. By his heroic action, at great peril to himself, he earned the everlasting gratitude of his fellow prisoners and of his country.”

In February 1973, Stockdale was released as part of Operation Homecoming. He returned to the United States, the torture having left him barely able to walk. 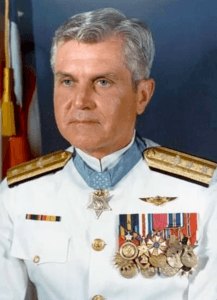 Already one of the most highly decorated officers in Navy history, in 1975 Stockdale was awarded the Medal of Honor. In 1979 he retired from active duty, with the rank of vice admiral.

After the Navy, Stockdale devoted himself to academics and college administration. He was awarded 11 honorary doctoral degrees.

In 1992 Stockdale’s friend Ross Perot ran for president as an independent. Perot had worked diligently and tirelessly on behalf of American POWs in Vietnam and the two men had great respect for one another.

Admiral Stockdale was no politician, but he agreed to stand in as Perot’s vice-presidential candidate, on the understanding that he would be replaced before the election. Unfortunately, that never happened. One week before the event, Stockdale learned that he would have to participate in a nationally televised debate with the other V.P. candidates—Al Gore and Dan Quayle.

If Jim Stockdale looked out of place on the stage that night, it is because he was. When the first question was directed to him, Stockdale didn’t hear it. He apologized, then remarked that he had forgotten to turn on his hearing aid. He immediately became the butt of jokes across America.

The comedian Dennis Miller shot back, two years later: “Now I know ‘Stockdale’ has become a buzzword in this culture for doddering old man, but let’s look at the record, folks. The guy was the first guy in and the last guy out of Vietnam, a war that many Americans, including your new President, chose not to dirty their hands with. He had to turn his hearing aid on at that debate because those f–ing animals knocked his eardrums out when he wouldn’t spill his guts. He teaches philosophy at Stanford University. He’s a brilliant, sensitive, courageous man. And yet he committed the one unpardonable sin in our culture: he was bad on television.”

Vice Admiral James Stockdale passed away in Coronado, California in July 2005 at age 81, after a long struggle with Alzheimer’s disease. He was born in Abingdon, Illinois on December 23, 1923.  We will never forget you sir, thank you for your courage and sacrifice to our country.