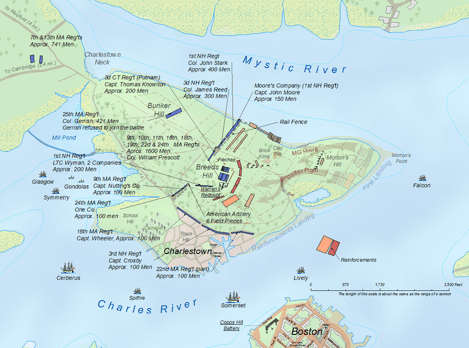 The first major battle of the American Revolution,the Battle of Bunker Hill, was fought on June 17, 1775.  Also called Battle of Breed’s Hill, it occurred in Charlestown – now part of Boston – during the Siege of Boston. Although the British eventually won the battle, it gave great encouragement to the revolutionary cause.

The skirmishes at Lexington and Concord in April left the British holed up in Boston, surrounded by hostile colonists. But it wasn’t clear if the rebels had the will or even the ability to battle the professional British Army.

There were two places where Boston would be exposed to artillery fire: Dorchester Heights south of Boston, and Bunker and Breed’s Hills in Charlestown, across the Charles River from the north shore.

It was mid June when the colonists decided to fortify the hills. They learned that British general Thomas Gage was about to occupy Dorchester Heights.

On the night of June 16, a thousand plus colonials marched from Cambridge to strengthen Bunker Hill, a 110-foot rise on the Charlestown peninsula on Boston Harbor. But the Americans passed by Bunker Hill in the dark, and instead began to strengthen Breed’s Hill, a much smaller rise closer to Boston. American Colonel William Prescott and his men had completely fortified the top of Breed’s Hill.

At least 5,000 Redcoats faced them from across the water. The next morning the British began firing on the Americans from warships in the harbor and a battery on Copps Hill in Boston. But the Americans were able to fortify their position. 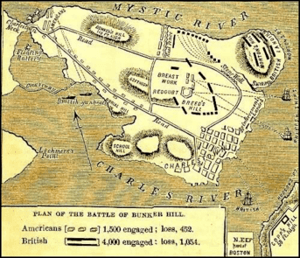 Gage sent out  2,300 troops under Major General William Howe, who managed to land unopposed under artillery protection. But the British were stopped by heavy fire from the colonials barricaded behind rail fences stuffed with grass, hay, and brush.

The British were finally successful after a second or third advance, but at a heavy cost. Casualties numbered over 1,000 British and 450 American soldiers. They could have followed up this battle with an attack on Dorchester Heights, but with heavy losses and the intense fighting spirit of the American rebels, British commanders decided against it.

The Battle of Bunker Hill pumped up the confidence of the Americans. There was no doubt that  the relatively inexperienced colonists could put up a good fight against the mighty redcoats of the British Army.