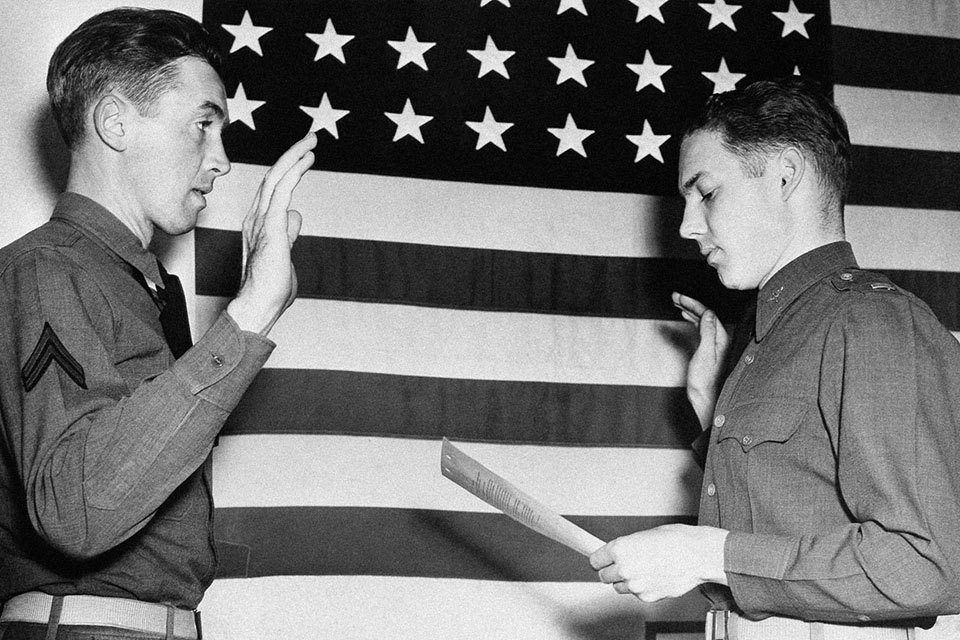 If you’ve watched movies from the 40’s and 50’s then you’ve most likely seen Jimmy Stewart in starring roles in It’s a Wonderful Life, Rear Window, The Spirit of St. Louis, and Mr. Smith Goes to Washington, and more. He was a kind, soft-spoken, and down to earth guy with a distinctive drawl that helped him portray roles of struggling middle class American men.

Many consider him one of the most influential actors in the history of American cinema. Over his career he won two Academy Awards, two Golden Globes, and numerous Lifetime Achievement awards.

Surely he was proud of his acting achievements, but probably he was more proud of his military career in the Air Corps. He became the first major American movie star to wear a military uniform in World War ll.

He was always interested in aviation, but his father discouraged him from attending the U. S. Naval Academy. He went to Princeton instead where he began his acting career, and eventually ended up in Hollywood making movies.

During this time, Stewart pursued his passion for aviation, logging over 400 hours of flight time as a pilot two years before the 1941 attack on Pearl Harbor.

Stewart was drafted into the Army in 1940 but was rejected because he was too skinny. At 6’ 3” he weighed only 138 pounds. After eating a steady diet of spaghetti, steaks, and milkshakes he finally qualified and shouted to fellow actors, “I’m in! I’m in!” He was stationed at Moffett Field, California and earned his pilot wings in the Air Corps.

Stewart’s salary dropped from $12,000 per week to $21 per month, but he dutifully sent a 10 percent cut to his agent each month.

He went on to be flight instructor, attended bombardier school, became operations officer, and then squadron commander. The actor-turned-commander was a successful, popular officer. A roommate recalled: “I always got the feeling that he would never ask you to do something he wouldn’t do himself.”

In January 1944, Stewart, now a major, became commander of all four squadrons of the 445th Bomb Group.

As his squadrons returned from a raid over Germany, Stewart saw the lead group, the 389th, was off course, heading directly for dangerous Luftwaffe airfields in northern France. He radioed the lead plane to explain, but the reply back was a curt no, they weren’t, “and stay off the radio!”

Stewart had to make a difficult decision: stay with the formation on the correct course, or follow the errant lead squadron. Two squadrons would be at peril, but a single one didn’t have much of a chance. He chose to stay with them and add his gun power to theirs.

Soon over Luftwaffe airfields, 60 planes swarmed up from bases below. The 389th commander’s plane went down in flames, along with seven others. But all the bombers in Stewart’s squadron made it home. A fellow officer later pointed out, “There were a lot of lives saved that day because he knew what he was doing and when he had to do it.”

Stewart’s closest call with death happened on a mission the following month. Lead planes hurled bundles of chaff overboard to try to fool the German anti-aircraft radar guns, but it only attracted gunfire to them. On the way home, after hitting their target,  a flak shell burst inside Stewart’s B-24 right behind the nose wheel. Somehow it kept  flying all the way back to base. But on landing the fuselage buckled, and cracked open like an egg. The crew climbed out, unhurt. Stewart looked at the crippled aircraft and in his characteristically understated fashion said, “Sergeant, somebody sure could get hurt in one of those damned things.”

Stewart ended the war with 20 combat missions.  He was awarded Distinguished Flying Cross,  Croix de Guerre and others. ” When he returned to Hollywood in 1945 , he refused a lavish welcome home party, saying, “Thousands of men in uniform did far more meaningful things.”

He remained in the USAF Reserve, was promoted to brigadier general in July 1959, and retired in May, 1968. He once said “I’d like people to remember me as someone who was good at his job and seemed to mean what he said.” 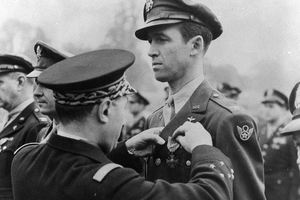 Jimmy Stewart is certainly remembered for being, not just good, but excellent, at both jobs, one on and one off the movie screen.