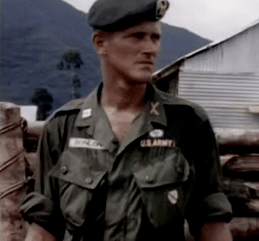 Men need cool and aggressive leadership when under fire. Captain Roger Donlon displayed just that on July 5, 1964. At 2:26 AM a barrage of mortar shells rained on his Special Forces Detachment camp.

He had just written to his wife, “All hell is going to break loose here before the night is over.”

He was not alone in his premonition. Most of the twelve men manning the small outpost just 15 miles from Laos in the Republic of Vietnam, had the same feeling.

Under attack by a Viet Cong battalion, the men were outnumbered three to one. Barking orders and directing defense, Donlon raced through exploding grenades and rifle fire to stop a breach at the main gate. Single-handedly taking out an enemy demolition team, he got his first injury of the night: a severe stomach wound. Disregarding his injury, Donlon stayed behind to cover the withdrawal of a mortar team. An explosion sent shrapnel into his shoulder, but once the men were safe he carried the mortar back to a new position. Captain Donlon moved around the camp, administering first aid, dragging ammunition to gun positions, directing mortar fire. With still another wound to his leg, Donlon went from position to position, hurling grenades and encouraging men to do the impossible. Another mortar shell exploded, wounding him in the face and body. Five hours of non-stop fighting continued. Finally, daylight arrived, and the enemy withdrew. Donlon later said that courage “was the core that allowed us to do things beyond what we thought we’d be capable of.” Captain Donlon was awarded the Medal of Honor for his actions that night.

All nine surviving members of Team joined Donlon at the White House where President Lyndon Johnson hung the Medal of Honor around their team leader’s neck. The humble hero said, “The medal belongs to them, too.” 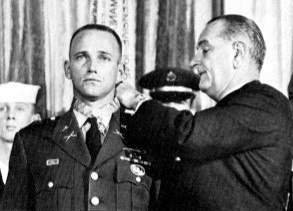 President Johnson awards Donlon the Medal of Honor in December 1964

Later he  wrote about that night of fighting, “It was a team effort, and I was simply the designated leader.”

Captain Donlon’s award was the first Medal of Honor awarded for action during the 14 year Vietnam War. 238 American soldiers would ultimately earn our nation’s highest honor for service in that war.