The Plot to Remove Washington: Part 2

Yesterday we began this story (see it here). You heard about Dr. Benjamin Rush, the Father of American Psychiatry, who was one of the most vocal critics of Washington’s handling of his troops.

This was the same Benjamin Rush who, all evidence to the contrary, championed bloodletting as a miracle cure.

I’m sure the leeches loved him. Rush insisted you could remove up to 80% of a person’s blood with harming him. No wonder fellow physicians called him the “Remorseless Master Bleeder.” No wonder today’s psychiatrists call him “father.” (These “modern” doctors champion shock treatment and implanting permanent wires in people’s brains to deliver shocks throughout the day.)

That was the kind of man who sought to remove George Washington as Commanding General.

But he was not alone. One of those trying to undermine Washington was an ambitious foreign officer named Thomas Conway. In a letter to Congress, Conway boasted of his skills and asked for a promotion to major general – skipping right over many men more senior.

Meanwhile Conway was spreading lies and rumor about General Washington. He was heard to say, “as to his (Washington’s) talents for the command of an Army, they were miserable indeed.”

When Washington heard of Conway’s letter to Congress, he sent a letter of his own. Part of it was, “General Conway’s merit, then, as an Officer, and his importance in this Army, exist more in his own imagination than in reality.”

He also wrote that “it is a maxim with him, to leave no service of his own untold.”

George Washington learned of a letter written by Conway to General Horatio Gates that called Washington a weak general.

Washington wrote Conway to let him know his letter had been exposed.

Conway wrote back and lied, saying he never called Washington “a weak General.”

He compounded his mistake by saying that while he considered Washington a “brave man,” he thought Washington was “influenced by men who were not equal to him in point of experience, knowledge or judgment.”

Typical of a backstabber, Conway thought his covert remarks would work with Washington.

They did not: Conway had not only disparaged the General, but now his staff as well. Washington had too much integrity to not see through Conway’s scheming.

It took time, but ultimately Conway had to resign. He kept spreading his criticism, though. 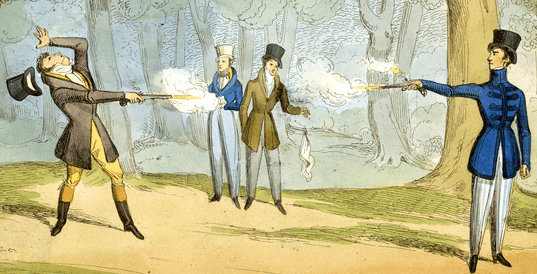 Finally, an ally of General Washington put an end to it. General Cadwalader challenged Conway to a duel. The plotting Conway was badly wounded during the duel, and it was the end of his treachery.