“A Minnie Ball Passes Through My Bible” 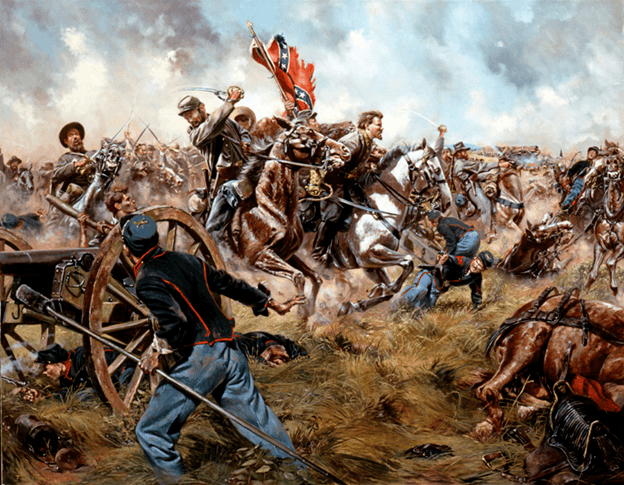 Time for another tale from Civil War author and humorist Private Sam Watkins of the 1st Tennessee Regiment. Here’s how he lived to fight another day.


Sam was on guard duty after a battle. It was never much fun. He writes:

“You don’t move more than ten feet at furthest before you have to halt…. You haven’t time to sit down a moment before you are ordered to move on again. And the Yankees dash up every now and then, and fire a volley into your rear.”

The next day the action got real hot:

“Bang, bang, siz, siz. We are ordered to load and fire promptly and to hold our position. Yonder they come, a whole division. Our regiment is the only regiment in the action.”

Two or more regiments make a brigade, and two or more brigades make a division. Sam was in a heck of a pickle:

“…our poor little handful of men are being killed and wounded by scores. There is General George Maney badly wounded and being carried to the rear…. A minnie ball passes through my Bible in my side pocket.”

Then suddenly an order comes to move aside:

“Here comes one piece of artillery from a Mississippi battery, bouncing ten feet high, over brush and logs.”

“The Rebels get the cannon set and “load, fire—boom, boom.”  The cannon and the rifles were “making music like the kettle and bass drum combined.”

The Yankees fell back.

As night arrived, the Tennessee boys “strip and wade the Chickamauga river. It was up to our armpits, and was as cold as charity.”

Sam tells us he fell asleep by a fire, ”it being the fourth night that I had not slept a wink.”

The Civil War would be a lot less interesting to read about, for both sides, without the first hand accounts of many of the battles as written by Private Sam Watkins, a common soldier serving in the Confederate Army. 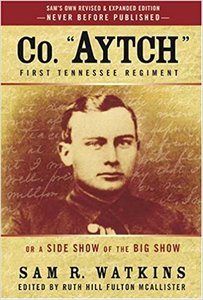 Thanks, Sam. You made it through another day and the entire war so you could write your memoirs. Seems you got  a little help from that Bible you kept in your side pocket, keeping that minnie ball from doing its intended job.