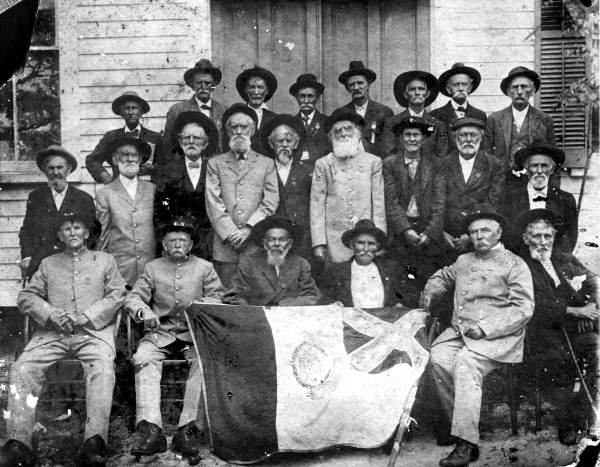 That’s the order Stonewall Jackson gave his men at the Battle of First Manassas (Bull Run to the Yankees out there).

Many a Federal learned to dread that sound.

Shouting during a charge was as old as war, but the Southern Boys in Gray created their own distinctive sounds. A Union captain at Chancellorsville explained “the heavens seemed filled with hot-breathed, shrieking demons.”

One Rebel tells us this:

“I always said that if I ever went into a charge, I wouldn’t holler. But the very first time I fired off my gun, I hollered as loud as I could and I hollered every breath until we stopped.”

Today we imagine that there was only one sound that was the Rebel Yell. Yes, Johnny Reb everywhere made it his business to adopt a terrifying holler, but it varied from one group to another.

The one we know best today was a “quick succession of high-itched yelps.” Another was an “ape-ilke grunt that rose gradually into a piercing howl.” Then again there was the “blood-curdling, full-throated caterwaul.”

Whatever was used, anyone who heard it knew Confederates were coming.

Rebels even had names for them. One officer told his men at Chickamauga to charge “with a regular Mississippi yell.” At the same battle, a Tennessee colonel ordered “three times three of Old Tennessee and charge.”

Whatever version, it was a mighty weapon. General Jubal Early was preparing a charge at Richmond when his officers told him the men were out of cartridges. Early roared, “Damn it, holler them across.” Bayonets fixed, his men charged, yelling like the devils they appeared to be.

One Billy Yank recalled it as “that terrible scream and barbarous howling.” Another said the sound “made the hair stand up on my head.”

The Union boys often shouted things like “Huzzah!” But they were no match for the Rebels.

The Rebel Yell made many a man’s blood run cold.

(The photo was taken at a 1904 Reunion in Crawfordville, Florida.)

Thanks for reading! By UltimateFlags where EVERY flag tells a story.  What’s your favorite Confederate States of America flag?  Tell us your favorite in the comments below. Be sure to share our posts with other proud Confederates!