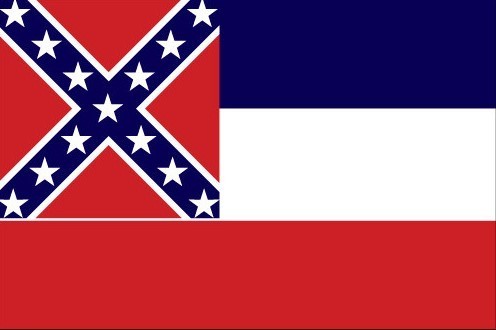 Which flags have Confederate history in them? And which state flags are up for attack next?

When the Arkansas flag was adopted in 1913 it had three stars in the center, representing the countries to which it belonged before statehood. In 1923, a fourth star was added to symbolize that Arkansas had been part of the Confederate States of America.

From 1868 to 1900, Florida’s flag was the state seal on a white background. Governor Fleming proposed that the red cross be added. Fleming had fought as a Rebel from 1861 to 1865. The stated reason was so it didn’t look like a surrender flag, but documents show it was inspired by the Confederate Battle Flag. There was a similar flag with a slightly different seal from 1900 to 1985. The current flag was adopted in 1985.

Alabama’s flag is even simpler. Alabama’s current flag was adopted in 1895. The legislation introduced by Representative John W. A. Sanford Jr. stipulates that “[t]he flag of the state of Alabama shall be a crimson cross of St. Andrew on a field of white. It was also intended to be square, like the ones used by the Army of Northern Virginia. The Alabama State Archives has a color drawing of it, part of the papers of Governor William Oates (governor from 1894 – 1896). Oates led the Confederate charge on Little Round Top at Gettysburg.

At the same time North Carolina seceded, it adopted its own flag, which you can see here. This continued to be the state flag of North Carolina until it was changed to a design submitted by a former Rebel soldier. Here is the flag today.

In 1956 Georgia adopted this flag.

It became controversial and was ultimately changed in 2003. It is now the 13-Star Confederate First National flag, with the addition of the Georgia state seal and the words, “IN GOD WE TRUST.”

When Mississippi seceded in 1861 it briefly used the Bonnie Blue. But it quickly adopted the “Magnolia Flag” as it was not officially part of the confederate states. The beloved “Magnolia Flag” reflects a rich tradition and heritage, and uses emblems that are older and more authentic than those of the current flag.

Like North Carolina, Mississippi used their Confederate flag for years after the war until 1894 when it adopted the flag below. While it was repealed in 1906 it continued in use. In 2003 voters once again made it the official flag of Mississippi.

And now in 2020, the Governer of Mississippi has removed this flag.  Mississippi Gov. Tate Reeves (R) signed a bill June 30, 2020 abandoning the state’s flag and stripping the Confederate battle flag symbol from it. What will the new MS flag design be? Perhaps they will go back to the Magnolia flag and stick with tradition.

Many are outraged that this wasn't brought to a vote by the people. And some say whatever it is, they hope it brings unity and strength to all the people of Mississippi. What are your thoughts on this?

Thanks for reading. Please share our posts with your friends and family so they too can learn more about Southern Heritage and History.  Brought to you by: Ultimate Flags