Even in the 1700’s women could be patriots and heroines. There are numerous accounts of brave women who nobly and courageously performed their patriotic duty during the American Revolution.

Here is the story of one such woman of South Carolina, Emily Geiger.

General Nathaniel Greene had retreated before Lord Rawdon who had divided his forces.. When Greene passed the Broad River, he wanted to send an order to General Thomas Sumter to join him so they could go on the attack against Lord Rawdon. But it seemed General Greene couldn’t find a man with the boldness to take on this mission and the danger involved.

The areas he traveled through was full of bloodthirsty Tories, eager to take out the Whigs  Finally, a teenage girl named Emily Geiger went to self to General Greene to offer her services a his messenger.

Why would a young girl be willing to put her life in danger for the cause? Her father John was not well enough to serve on the battlefield and so she wanted to serve her country in any way she could.

The general, surprised but delighted, agreed to let take on the mission of going past enemy lines to deliver a message. He  wrote a letter and gave it to her, telling  her about the contents just in case of an accident or capture.

Emily rode sidesaddle on horseback, traveling under the guise of taking a trip to her uncle’s house many miles away.

On the second day of her ride, Lord Rawdon’s scouts stopped her near the Congaree River. Emily who could not tell a lie without blushing, and was coming from the direction of Green’s army, was immediately held under suspicion and confined to a small room the size of a shed.

The officer sent for an old Tory matron to search her for papers. Emily knew immediately she should destroy the letter, but didn’t know what to do with the pieces.

But as soon as the door closed, she started to eat the pieces of the letter, and got them all down before the matron Mrs. Hogabook arrived. After carefully searching Emily, the matron found nothing. The officer apologized for the error and allowed her to leave, even giving her an escort to her uncle’s house.

The next day, Emily set off taking a route that would avoid interception and soon arrived safely at Sumter’s camp. Emily delivered Greene’s verbal message, and how she had been stopped by the enemy scouts  Sumpter immediately went to join Greene and the main army at Orangeburgh. 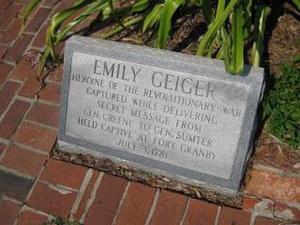