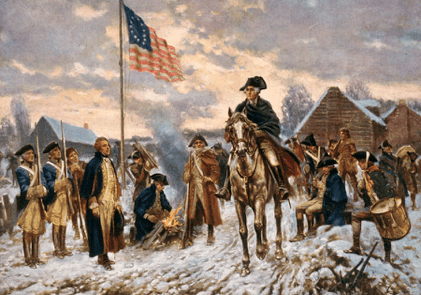 Most Americans think about the fight for independence and sacrifices made by our Founders on the 4th of July. It’s summertime and the weather is usually hot while we are vacationing and visiting Independence Hall or Boston. But the story of the American Revolution is best told in the freezing days of winter.

“The oldest people now living in the country do not remember so hard a winter.”

Those are the words of General George Washington, written as he and over 7000 patriots were holed up In January 1780.  Washington had decided to place his army at Morristown, New Jersey for the winter. When they arrived at the site in November 1779 there was already a foot of snow on the ground.  The temperature only made it above freezing a couple times.

But that was before the blizzard struck in the new year.  As it did, James Thacher wrote in his journal:

“No man could endure its violence many minutes without danger of his life.” If a tent blew down, soldiers were “buried like sheep under the snow…almost smothered in the storm.”

It was impossible to get supplies. George Washington wrote in a letter dated January 8.  “…the Troops, both Officers and Men, have been almost perishing for want.”

One might think this was Valley Forge, but it was a two-year old memory at this point. No, this was Morristown and it was much worse. Major General Johann de Kalb was there and wrote:

“Those who have only been in Valley Forge and Middlebrook during the last two winters, but have not tasted the cruelties of this one, know not what it is to suffer.”

Private Martin was also there:

“We were absolutely, literally starved. I do solemnly declare that I did not put a single morsel of victuals into my mouth for four days and as many nights, except a little black birch bark which I gnawed off a stick of wood.”

That winter of 1780 was so severe that the waters around New York City completely froze and closed down navigation for several weeks (the only time in recorded American history that this has occurred).

Officers remembered ink freezing in their quill pens and one surgeon recorded:

“we experienced one of the most tremendous snowstorms ever remembered; no man could endure its violence many minutes without danger to his life. … When the storm subsided, the snow was from four to six feet deep, obscuring the very traces of the roads by covering fences that lined them.”

The cold and lack of food went on for months. Yet despite such severe hardships, men like these, the truest of Patriots, kept on for three more years. Private Martin said of those men:

“They were truly patriotic, they loved their country, and they had already suffered everything short of death in its cause.”

If they had not, the liberties they forged may never have spread across our land.