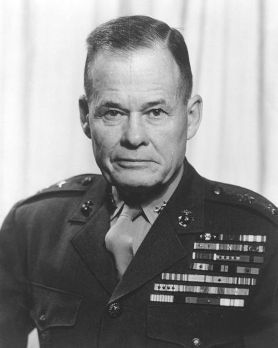 “Goodnight Chesty Puller, Wherever You Are!”

In his thirty-seven years of service to the United States Marine Corps, Lewis Puller, nicknamed “Chesty,” would rise through the ranks from Private to General,  and become the most decorated Marine in American history.

How does a guy get a nickname like “Chesty”? It is said that he had perfect posture and his torso resembled a “full-size beer keg full of lead bricks.” There is the myth that his chest had been shot away and he got a new one – a steel plate.

Others say “chesty” was an old Marine expression meaning cocky. Puller himself was not sure of how he came by the name, but he wore it well.

Thousands of words cannot do the man justice, but here are a few.

On Guadalcanal, two Marine companies were surrounded by a large enemy force. Rescue efforts failed, and the operation commander told Puller it was hopeless. Puller marched out of camp, went down to the beach, and hailed a destroyer off the coast. Boarding the ship, he directed fire on the enemy. The shelling, along with a second landing, cleared a path for the Marines to escape.

By the time Puller left Guadalcanal, he had been shot twice and taken shrapnel from a mortar round.

Puller’s men admired him and his enemies feared him. He led from the front, fighting with his men in the trenches. He never flinched even under even the most serious fire.  One time when a grenade landed next to him, the men around him dove for cover. But Puller glanced at it and nonchalantly said, “Oh, that.  It’s a dud.”  Well, I bet it wasn’t a dud until Puller ordered it to be.

In Korea, Puller’s 1st Marines were surrounded by Chinese infantry. There were some journalists with his force and they asked him what he was going to do about it. He is reported to have said:

“Chesty” Puller inspired loyalty and courage in his Marines, treated his men well, insisted on the best equipment and discipline for his troops. He had no fear, and his win at all costs attitude won him those countless medals, citations, and ribbons.

Puller has been recognized as the “baddest dude” to ever wear the uniform of the United States Marine Corps, and represents the pinnacle of toughness.

To this day, Marines at Parris Island end their day by saying,

“Good night Chesty Puller, wherever you are!”