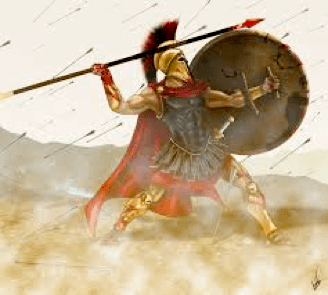 “Our Arrows Will Block Out The Sun”

Persian King Xerxes was trying to fight his way into Greece 2500 years ago during the Battle of Thermopylae (480 BC), one of the most famous battles in history . Spartan King Leonidas, along with a few thousand guys, was doing a good job of slowing him down. The idea was to give the rest of Greece a chance to get mobilized so they could send Xerxes packing.

Anyway, Xerxes offered to cut Leonidas a great deal if he would get out of the way. I’m not sure who Xerxes thought he was dealing with, but

Leonidas told him to take a hike.

Then the Greeks were told more forcefully to lay down his arms. Leonidas replied with his famous line, “Molon Labe,” translating as a classical expression of defiance:

“Come and take them.” 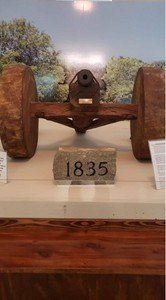 The Cannon (on display at the museum in Gonzales, TX) – Thank you for sharing @ Michelle Thomas, direct descendant of Texas Revolution

I’m sure you know those words, and that the citizens of Gonzales, Texas used them when they were told to give up their cannon (which they never did) during the Texas Revolution. The men of Gonzales fired the little cannon at the Mexican troops.

And they raised a flag sewn from a woman’s wedding dress that showed a lone star, an image of the cannon, and the defiant words “Come and Take It.”

This same slogan was used earlier in 1778 at Fort Morris during the American Revolutionary War in the Province of Georgia.

“As to surrendering the fort, receive this laconic reply: COME AND TAKE IT!”.

Lack of intelligence of the area, combined with a big dose of Colonel McIntosh’s bravado, made the British think twice about an attack. They decided to skip it and withdrew.

Back to Xerxes and Leonidas: You may not have heard about is this next one.

Persian King Xerxes sent a messenger to one of Spartan King Leonidas’ generals with the threat:

“Our arrows will block out the sun.”

“Then we shall have our battle in the shade.”

Don’t you just love it!  With all that’s going on in the world today, and the President talking about gun control, I know many citizens that have the exact same sentiments as those in the history above!