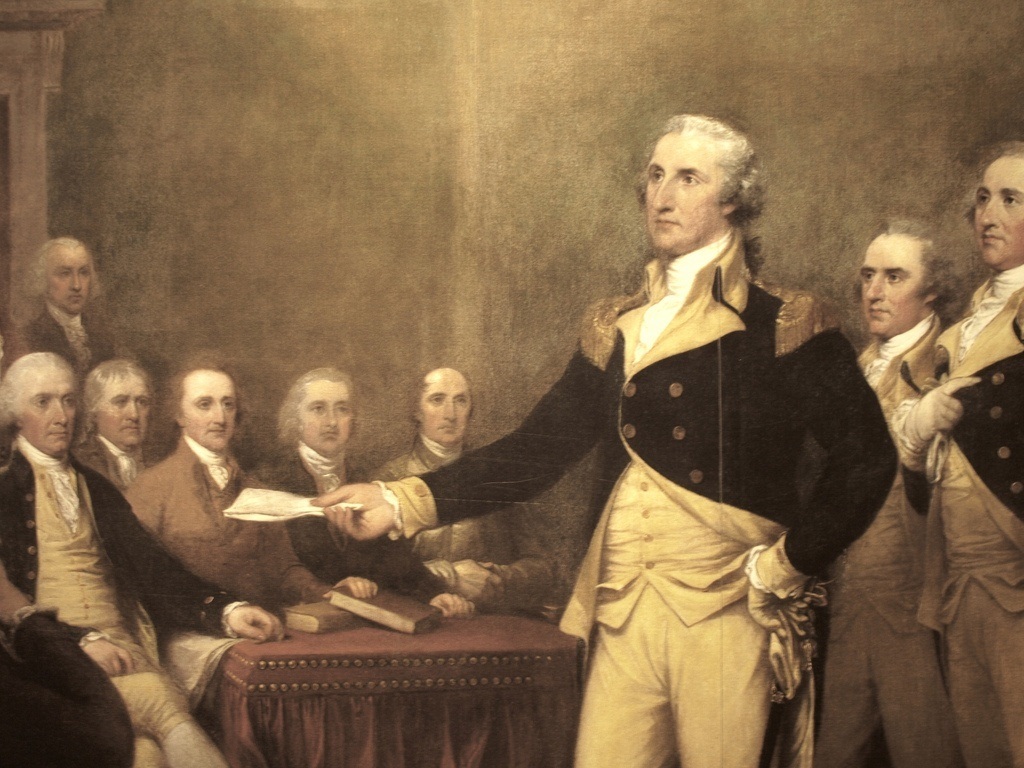 George Washington paused and said, “Gentlemen, you must pardon me.”

But I get ahead of myself.

It was 1782. Except for some skirmishes, hostilities in the Revolutionary War had ended with the surrender of British General Cornwallis at Yorktown.

But a peace treaty had not not yet been negotiated and signed, and British garrisons were still on American soil.

The nation did not yet have a constitution. The Continental Congress acted under the authority of the Articles of Confederation, relying solely on the States for funds.

Those States were now very reluctant to pay for the expenses of the Army, and many of the soldiers had not been paid for months.

An anonymous letter circulated calling for the soldiers to issue an ultimatum. It was proposed that if Congress didn’t comply, the army would either threaten to disband and leave the new country unprotected, or refuse to demobilize after a peace treaty was signed.

The last was a threat to use military force to impose the Army’s will.

Word of all this reached George Washington. He called for a meeting of officers in four days. Matters could be discussed, though he implied he would not be present.

When the officers gathered they were surprised to see General Washington enter the room.

He was not pleased with the mutinous proposals.

Washington denounced the author of the letter, saying his plan had “something so shocking in it, that humanity revolts at the idea.” He went on:

Washington said it was true that the army had suffered, but he pointed out to them that he had been with them through every hardship. He also told of his own efforts to ensure the Army would be paid.

Washington asked the officers if they were willing to leave their wives, children, and property unprotected and defenseless in the face of the British army. Or if they might “sully their glory” by acting as a lawless mob.

As he prepared to end, the General told them he wanted to read a letter from a member of Congress, one who was supportive of getting the men paid.

After stumbling through the first paragraph, Washington reached into his pocket for a pair of spectacles.

Up to this time, only his personal staff had ever seen him with glasses:

“Gentlemen, you must pardon me. I have grown not only gray, but almost blind in my country’s service.”

The officers were so moved that some had tears in their eyes.

After Washington left, the officers decided to present him “the unanimous thanks of the officers” adding that they “reciprocate his affectionate expressions, with the greatest sincerity of which the human heart is capable.”

The mutinous threat was over.

Washington continued his actions to see that all of his soldiers were paid in full for their service, and was ultimately successful.