How tough do you have to be to survive a Nazi concentration camp, defend a hilltop against wave after wave of enemy troops – twice – then spend 2 ½ years in another hellish prison camp, and still live through it?

Hard as nails tough, Corporal Rubin tough. That’s him in the photo.

Hungarian-born Tibor Rubin was 13-years-old when the Nazi’s swept over his family’s land. Because he was Jewish, Rubin was shipped off to Mauthausen Concentration Camp. Somehow, he managed to survive for 14 months until liberated by American troops. 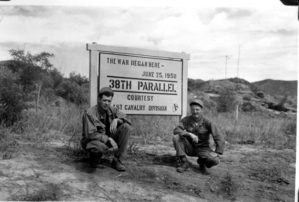 To repay the favor, Rubin managed to make his way to America and enlist in the US Army. Assigned to the 1st Cavalry Division, he was soon in the Korean War.

Corporal Rubin’s unit was atop a hill when it was attacked by “overwhelming numbers of North Korean troops.” Every one of his teammates were killed, but Rubin didn’t quit and didn’t run.

His Congressional Medal of Honor citation states he “inflicted a staggering number of casualties on the attacking force during his personal 24-hour battle, single-handedly slowing the enemy advance and allowing the 8th Cavalry Regiment to complete its withdrawal successfully.”

When reinforcements arrived they found Rubin with a smoking gun, out of ammo, and surrounded by more enemy casualties than could be counted.

Two weeks later he made a one-man assault and captured over 100 enemy troops, by himself.

A few months later his unit was hit by a massive nighttime assault. Manning a machine gun throughout the night and the next day, he allowed his unit to retreat. He kept at it until he ran out of ammo, was severely wounded and captured by enemy soldiers.

Despite an offer by his captors to return him to Hungary, Rubin stayed. He saved the lives of 40 of his buddies by repeatedly sneaking out of the POW camp to scrounge up food and medical supplies to care for wounded and starving prisoners.

Using raw courage and what he’d learned in the Nazi camps, Corporal Rubin kept at it for 2 ½ years until he and his fellow prisoners were finally released.  Thank you for your service Corporal.  May we all be as brave and courageous as you.

Thanks for reading! Please share with your fellow patriots on social media.  Brought to you by: Ultimate Flags