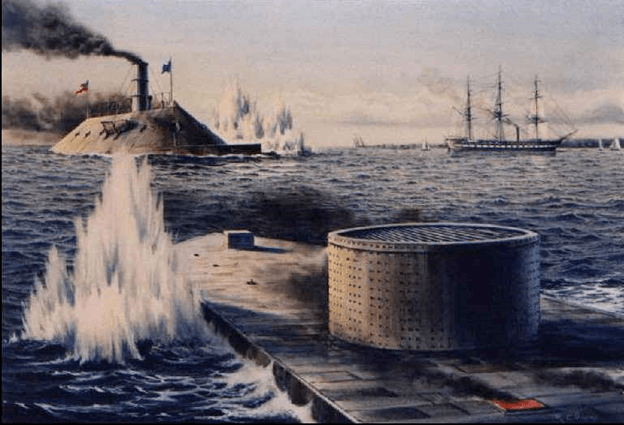 In school we learned about the Monitor and the Merrimac. But the Merrimac was not its name when it battled the Monitor. It was actually Confederate Ship Virginia, and was never defeated in battle. Its Union nickname was “Rebel Monster.”


Virginia did start her life as the wood-hulled Merrimak (yes, with a k, historians misspelled it).  A week after Ft. Sumter, the state of Virginia took possession of her – burned and sunk by the Union.

The Rebels rebuilt her as an ironclad, with 2-inch steel plate. She was tough.

Admiral Buchanan was in command during her first battle. As a U.S. Navy officer, Buchanan had helped create the Naval Academy at Annapolis. Now he was in command of Virginia’s navy, steaming toward the Union blockade.

Thousands lined the river as Virginia closed on the Federal ships. When she reached the bay leading into the Atlantic, the USS Congress, opened fire. The volley bounced off her armor. The two ships exchanged broadsides. A Union officer wrote that shots “bounced off the ironclad like rubber balls.”

On fire, Congress ran aground. Virginia continued toward the next Union ship.

As she approached, Virginia received simultaneous hits from Union shore batteries and USS Cumberland. Shots ricocheted off the Virginia, causing little damage. Virginia blasted the Cumberland and prepared to ram her.

“Hang on!” bellowed Admiral Buchanan, as Virginia pierced the Cumberland. Buchanan backed his ship, then rammed again. The Cumberland was a wreck, and her crew abandoned ship.

Virginia advanced and fired on two more Union ships, damaging one before darkness closed in. At this point, Virginia looked like the most powerful ship in the world.

The battle continued the next day, in the now-famous slug-out with the USS Monitor. The “Rebel Monster” seemed invincible on the first day of that battle in 1862.

On March 8th, the 12-gun ironclad CSS Virginia destroyed the 24-gun USS Congress, the 44-gun USS Cumberland, and was hard at work on more when darkness fell.

The fight was not without cost. As Virginia was bringing on board sailors from Congress, a Union sharpshooter on shore put a minnie ball into her captain’s leg. He would not be fighting today.

As the sun rose on March 9th, sitting low in the water was the Union ironclad Monitor. It had arrived after yesterday’s battle. The 263-foot Virginia steamed out to meet her.

As Union and Confederate crowds watched from opposite shores, the world’s first battle between iron ships began. The “floating barn roof” Virginia and the 172-foot “cheese box on a raft” blasted away at each other.

Monitor could fire once every eight minutes or so, but was faster. Virginia had steamed that day without her cast iron solid shot shells, loading shells most effective against wooden ships. She had not expected a Yankee ironclad.

Thick armor was protecting both ships from vital damage. A sailor on the Virginia said he could “do as much damage by snapping my finger at her.”

Virginia was hit 20 times, Monitor 23. If they had been wooden, both would have been smoking wrecks. The battle ended in a draw.

But the Rebels had taken the Federals by complete surprise the first day. The U.S. Navy would not suffer as bad a defeat in battle until World War II.

Both of these ships had shown the world that the day of wooden navies was indeed over.

His Court Martial Almost Ended It

“All were American soldiers…”