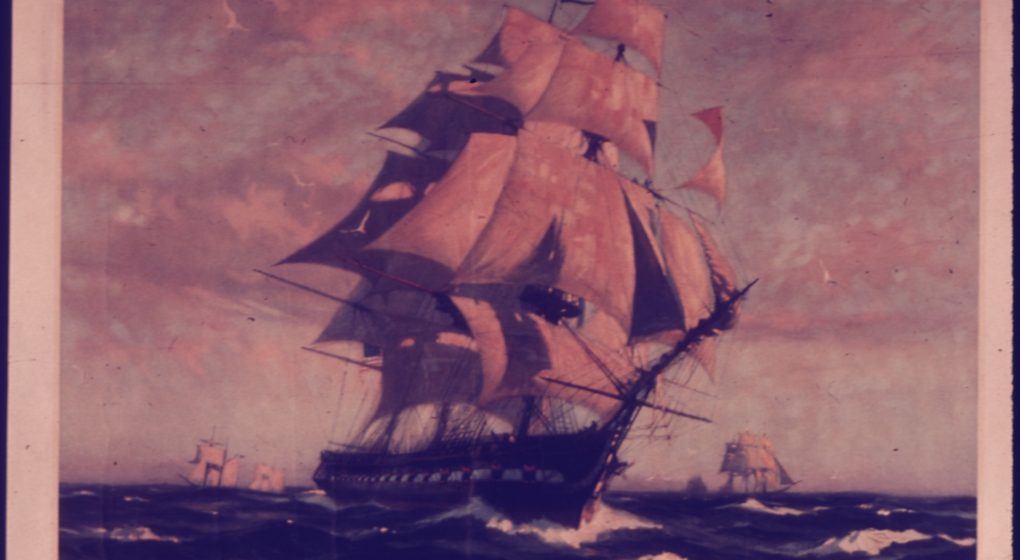 The day was overcast, winds blowing hard as the Warships neared each other.

The War of 1812 between Britain and America had just begun.  The USS Constitution and the HMS Guerriere were now enemies.  Captain Hull was in command of the Constitution, and we have his report.

“The Gallant crew gave three cheers” when Hull ordered the ship into battle.

After raising her flag, Guerriere, “fired a Broadside, but without effect, the Shot all falling short…”

The ships maneuvered for almost an hour. Finally, Constitution came alongside the Guerriere.  At a distance ”less than Pistol Shot, we commenced a very heavy fire from all of our Guns.”

Within 15 minutes, the Guerriere had lost a mast and had heavy damage to her sails.  The Constitution “had received but little damage.”

When a sailor on the Guerriere saw a cannonball bounce off the hull of the Constitution, he exclaimed, “Huzzah, her sides are made of iron!”

Just as Captain Hull decided to send boarders over, two more of the Guerriere’s masts went down.  She was now totally disabled.

Captain Hull backed the Constitution away.  It became dark, and Hull ordered a boat sent “to see whether she had surrendered or not, and if she had to see what assistance she wanted.”

About 20 minutes later the boat returned, with Guerriere’s captain on board.  It was over.

“Our Boats were immediately hoisted out and sent for the Prisoners, and were kept at work bringing them and their Baggage on board, all night.”

British Captain James Dacres wrote this in his report:

“…the conduct of Captain Hull and his Officers to our Men has been that of a brave Enemy, the greatest care being taken to prevent our Men losing the smallest trifle, and the greatest attention being paid to the wounded…”

The next morning Captain Hull could see the Guerriere was beyond salvage:  “At daylight we found the Enemy’s Ship a perfect Wreck.”

It was not the first victory for Old Ironsides, nor would it be the last.

To read out first story about this ship, click here.