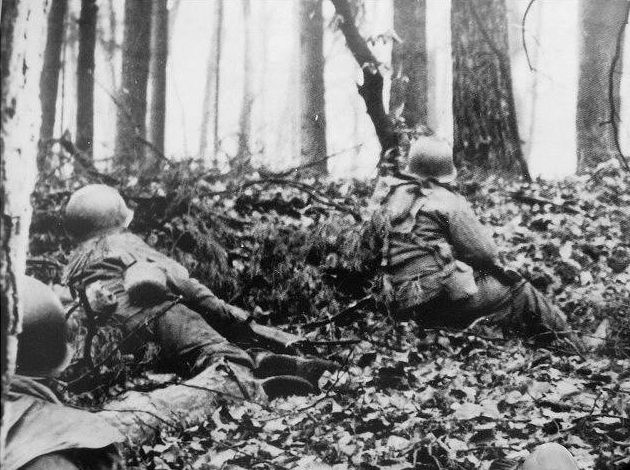 Before the Battle of the Bulge of WWII, American forces fought the Battle of Hurtgen Forest – the longest single battle in the history of the US Army. When the Germans were defeated in France in August 1944, GIs began to believe the war would be over by Christmas, but when the Americans reached German territory, things changed. It became the longest battle on German soil.

It was fierce combat that went on for three months, in German woods that looked like something out of Grimm’s Fairy Tales. And like those stories, death lurked around the corner. Julius Astin was there:

“The Germans were dug in. We couldn’t make any headway because the forest was thick with vegetation, booby traps and mines. One thing we hated was the airburst 88mm shells, fused to explode as soon as they struck the trees, sending shrapnel and wood splinters sharp as spears down on us.”

So the Americans became tree-huggers to avoid the rain of death from above. “You move, you die,” Astin said. “A lot of the shrapnel is still in there,” referring to his body.

Private Marcario Garcia was also in the Hurtgen Forest. His company was pinned down by machine gun fire at on November 27th, 1944. Seriously wounded, Garcia decided to do something about it. He crawled forward, inch-by-inch, until he was close enough to hurl a grenade into the machine gun nest.

Another machine gun opened up as Garcia got back to his teammates. Now he was pretty fed up, so he charged the second nest and destroyed it, returning with four prisoners.

Still bleeding, Garcia continued to fight until his company’s objective was taken. His Medal of Honor citation states, “Only then did he permit himself to be removed for medical care.”

Private Garcia  was the first Mexican citizen to receive America’s highest award for bravery. (Later in 1945 President Truman honored him at a White House ceremony. Garcia became an American citizen in 1947.)

During Hurtgen Forest,a dozen American Infantry, Airborne, and Armored Divisions ducked it out with 14 divisions of the Wehrmacht. And the only reason it ended was because the Battle of the Bulge started up.

The Battle of the Hurtgen Forest lasted from September 1944 to February 1945. Despite its length and great loss of life, it was overshadowed by the Battle of the Bulge victory. It takes its place as one of the forgotten battles of World War II.

We may forget the details of the battles and the war, but let’s never forget about those individual women and men, the heroes, like Private Garcia, who sacrificed much and served so bravely.  Thank you for making America proud Private Garcia.