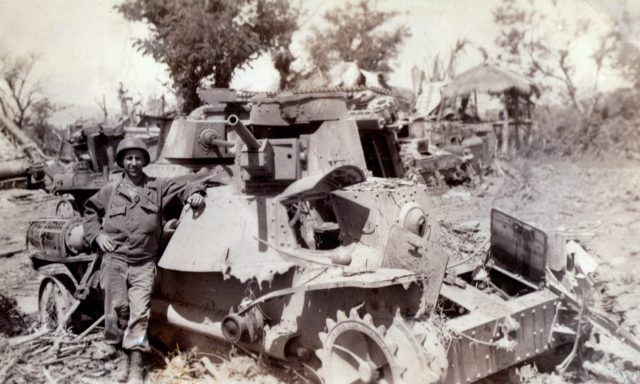 One Soldier Meets 5 Tanks:  ”Nobody’s gonna get past MY roadblock!”

In October 1944, General Douglas Macarthur stepped onto the Philippine island of Leyte, and made his radio announcement to let the Japanese and the world know: “People of the Philippines, I have returned!”

It was December 1944. PFC Dirk Vlug and his regiment were was on Leyte Island to chase retreating Japanese across the jungle. He was standing guard duty at roadblock outside the city of Ormoc when suddenly two enemy tanks headed his way. The tanks were about to meet their worst nightmare as someone was about to earn the U. S. Medal of Honor.

Private Dirk calmly picked up his bazooka and advanced on the first tank,. 37mm rounds struck all around him, but they all missed. He loaded, fired and destroyed the tank.

Crew from the second tank dismounted to attack him. But He fought back with his .45 Colt 1911, chasing them back into the tank. Then he reloaded the bazooka and destroyed his second armored vehicle of the day.

Three more hostile tanks approached. Vlug ran up beside the first and blew it up. More bullets flew at him, but he kept running toward the second one, also taking it out with a direct hit. The third veered, but Vlug was faster. Again, he came under heavy fire. Unruffled, he proceeded to take out the fourth tank.

The remaining tank should have taken a hint by now. With his one remaining round Dirk blasted the fifth one. He only grazed it, but it was enough. He watched it tumble down a cliff.

History doesn’t tell us what this private did next, but I you can just picture him walking back to his post, lighting up a cigarette, and saying to himself, ”Nobody’s gonna get past MY roadblock!”

For his outstanding courage and performance,  Vlug was awarded a US Medal of Honor on June 26, 1946.

In the picture above Private Vlug  poses with a tank he destroyed.