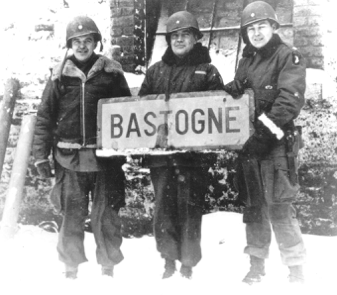 The message, as you can imagine, was not too polite. Among other things, it pointed out that the Americans were surrounded, and included these words:

“If this proposal should be rejected one German Artillery Corps and six heavy A. A. Battalions are ready to annihilate the U.S.A. troops in and near Bastogne.”

The 101st Airborne was defending Bastogne. Its acting commander was Brigadier General McAulliffe (that’s him in the center of the photo above). He was not the kind of soldier who thought a little thing like being surrounded and out-numbered was that big a problem, so he misunderstood the message.

The General asked, “They want to surrender?”

Lt. Colonel Moore replied, “No sir, they want us to surrender.”

McAulliffe exploded in anger. He took the paper, looked at it, and said, “Us surrender, aw nuts!” and dropped it on the floor.

Major Wagner was told that the 101st was not going to surrender, but he insisted on a formal, written reply. When General McAulliffe was told this, he wondered aloud, “Well, I don’t know what to tell them.”

An officer present said, “What you said first would be hard to beat.”

McAulliffe asked “What do you mean?”

So McAulliffe wrote it down on a message pad and ordered, “Have it typed up.”

The reply was typed up, centered on a full sheet of paper. It read:

To the German Commander