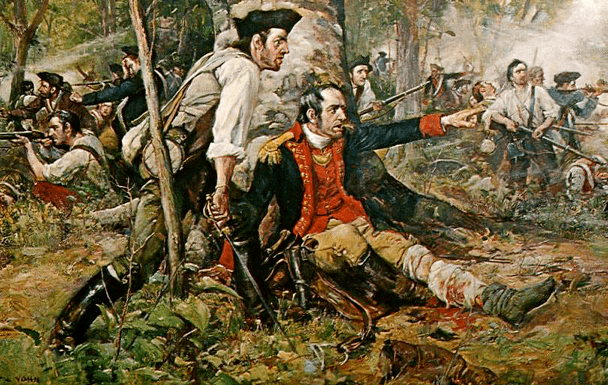 There were plenty of fierce battles in the American Revolution, but few were as violent as six hours of hand-to-hand fighting that took place 100 miles from the Canadian border. Patriot General Herkimer and 800 militiamen were marching through a forest and bog so dense that you could not see a man 30 feet away. The British used that setting for a perfectly laid ambush that would become known as the Battle of Oriskany.

A blaze of musket fire erupted suddenly as the Americans entered a narrow ravine. The militia, mostly farmers with the support of 60 Oneida Indians, were taken completely by surprise. General Herkimer’s leg was shattered, and several of his senior officers died instantly, along with a dozen men leading the column. It should have been a complete route, with inexperienced, panic-stricken men fleeing for their lives.

But that was not to be. These men, without orders, immediately counter-attacked, rushing up the hills, surprising and bayoneting their attackers. Their courageous response saved the day. General Herkimer, crippled and in pain, had his men carry him up the hill so he could direct the fight, proclaiming, “I will face the enemy.”

In the dense woods, it was a man-to-man battle, but Herkimer directed his men to fight in pairs, one firing while the other reloaded. This was effective, and casualties lessened on the American side.

A contingent of British rushed to reinforce the ambushers, turning their coats inside out to resemble the clothing of the militia. But one of the Americans spotted the ruse, and charged them, killing three immediately. More militia followed, sending the reinforcements into retreat.

The Oneida Indians were busy, too, fiercely battling along with the milita. Their chief’s 15-year-old daughter was present, and she grabbed a musket and fought alongside her tribesmen, war cry in full display.

The fight went on for a full six hours, but eventually British casualties mounted to the point that it made no sense to continue, so they withdrew.

The Americans had suffered greatly in the battle, but it should have been a complete massacre. The courage and tenacity of the militiamen and their Oneida allies had turned the tide.