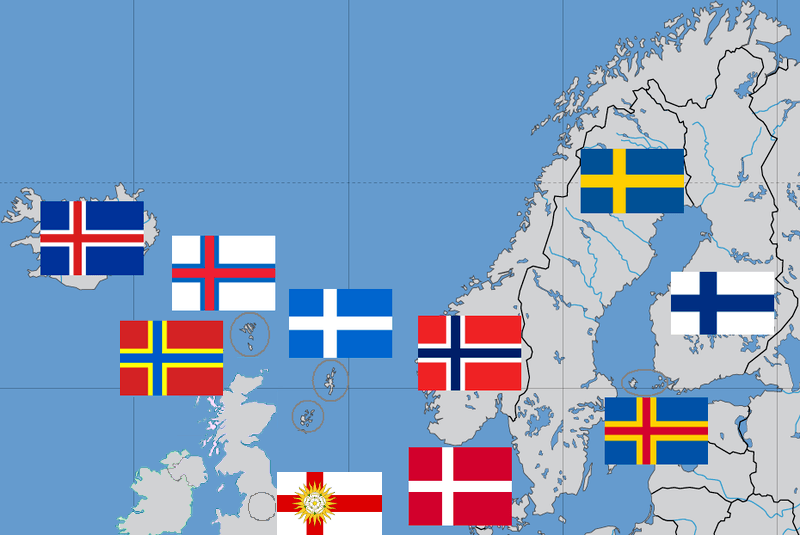 If you watch the Olympics, the World Cup, or other international sporting events, the issue of flags having similar designs and causing some sort of confusion isn’t new. The big overlap in the design and colors makes their distinction very hard at first glance. Whether you want to make flags for sale, or you just want to own one from a given country, it’s important to understand the distinction each has. Below is a list of nine flags that are similar in their design:

These are the world’s most closely matched flags. They are almost identical in their size and design, it’s only a slight difference that is noted in the shades of blue-yellow and red vertical stripes when examined closely. Andorra has a similar flag but it has a coat of arms placed at its center.

The two flags are designed with two horizontal stripes, only that the one for Indonesia is longer. Both have the red stripe running over the white one. The one close to these is that of Poland but its white stripe runs over the red stripe.

Both flags are not only similar in the design of the green, yellow and red vertical stripes but also their dimensions. To differentiate them, you will realize a slight difference in the shade of their colors. In addition, the flag of Senegal has a green star in its central stripe. Guinea’s flag is similar to these two only that it has its stripes reversed to red, yellow then green.

They are both designed based on the British Blue Ensign. This is a blue field with a top inner corner or a Union Jack in the Carton. The version of Southern Cross constellation featured on them is so stylized. Despite the similarity, these flags have significant differences. The Australia’s constellation features five white seven-pointed stars while that of New Zealand, four red-and-white five-pointed stars. Also, Australia has an additional sixth larger commonwealth star. The shade of their colors (red and blue) also differ.

Their yellow-blue and red horizontal stripes are similar. Ecuador’s and Colombia’s national flags portray unequal stripes with the yellow stripe being relatively larger in size. Venezuela’s stripes are equal in size in addition to their national coat of arms placed in its upper hoist corner and an arc of stars placed at its center. Also the Ecuadorian national flag has its national coat of arms placed at the flag’s center.

Both flags share a similar design of vertical stripes of green-white and orange. The only difference is that the green stripe on the Irish national flag is on its hoist side.

8. The Netherlands and Luxembourg

Both flags are designed with horizontal stripes of red-white and blue. The only difference is that that of Luxembourg uses a different shade of blue and is slightly longer.

Most of these relationships in their design and color choice could be attributed to the history of the respective countries and their proximity to each other. That aside, their resemblance is really confusing in many instances and if you are making flags for sale, remember to incorporate the finer details discussed above.