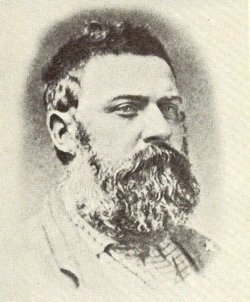 Major John Harman (above) was described as a “man of strong convictions and uncompromising in his beliefs, caring little for the opinion of others.”

A good summary, but I would add he was short-tempered and his language turned the air blue.

Harman had been many things before the Civil War: butcher, farmer, and stage line operator among them. Unafraid of adventure, he had joined the Texas Rangers and served in the Mexican War.

Religion had a strong influence on the Army of Northern Virginia, and General Jackson was one of the fiercest faces of religious conviction. Stern and disciplined, he didn’t tolerate impiety around him. Cursing in his presence did not go unrebuked, repeated only at one’s personal risk.

Harman was a man of strong opinions and force of will. He had raw manners and liked to get things done with unrestrained enthusiasm, intimidation and profanity fit for a sailor. 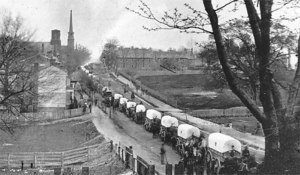 Managing a 14-mile-long wagon train during a military campaign was not a job for the weak of will. A fellow officer said Harmon was a “big-voiced, untiring, fearless man who would have ordered Jackson himself out of the way if necessary to obey Jackson’s orders.”

On a hot day in 1862, Lee’s army was crossing the Potomac to invade Maryland during the Antietam campaign. When Jackson rode up he found the fording of the river completely blocked by Major General D. H. Hill’s wagon train.

Jackson rebuked Hill for the mess. Apparently Hill explained something to Jackson that implied “it was no part of his business to get tangled wagons out of the river.”

Harman splashed into the water and the tangled mass of wagons. Brigadier General Imboden tells us that the Major “poured out a volume of oaths that would have excited the admiration of the most scientific mule-driver.

“The effect was electrical. The drivers were frightened and swore as best they could, but far below the Major’s standard. The mules caught the inspiration from a chorus of familiar words, and all at once made a break for the Maryland shore, and in five minutes the ford was cleared.

The General witnessed and heard it all. Stonewall Jackson was not known to ever let cursing go without a rebuke.

Harman rode back to the Stonewall, steeled for dressing down. Touching his hat, Major Harman said:

“The ford is clear, General! There’s only one language that will make mules understand on a hot day that they must get out of the water.”

The General smiled, said, “Thank you, Major,” and dashed into the water at the head of his staff.