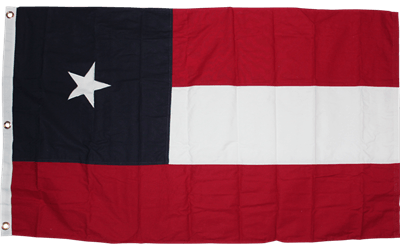 This unique flag was created in Richmond, Virginia, for the 5th Texas Regiment:  the “Bloody Fifth.”

This was one of three Texas regiments that fought with Lee’s Army of Northern Virginia.  Their flag was based on the design of the Confederate First National Flag, the Stars and Bars.  Instead of a circle of stars representing the Confederate States, it has one “lone star” in the upper corner, symbolizing Texas.  The men called it the “lone star flag,” or the Lone Star and Bars.

This flag was in use until the Army of Northern Virginia decided to standardize their battle flags, adopting the famous Southern Cross.  The lone star flag was then stored in a warehouse depot in Richmond. 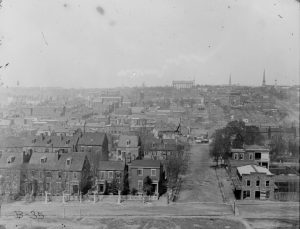 But some of the men hatched a scheme to get it back.  Their commanding general, John Bell Hood, ordered his brigade’s battle flags sent back to the depot in Richmond to have new battle honors added.  Some of the Texas officers went to the depot to return the flag.  While they were there, they swiped the original flag.  Then, when the authorized flag came back, two officers switched it for the lone star flag.

The next day the regiment marched out of camp, toward the Battle of Second Manassas.  On the way, a review was held, but the regiment’s color bearer kept the unauthorized flag hidden in its case.  As General Hood was riding down the line he noticed the case, and ordered that it be opened.  One officer described what happened next:

“…when its beautiful folds were given to the breeze a cheer broke loose, despite the fact that officers did all they could to restrain it.”

Hood was not happy, asking, “Adjutant, why do you not have your battle flag, sir?”

Wood said that since he did not have the authorized flag, “I brought along the Lone Star flag of Texas.”

Hood replied, “I believe you know more of this than you are willing to tell,” but continued reviewing his troops.

The Lone Stars and Bars soon led the regiment into some of its most famous battles, and we still reproduce it today.

To read about how the “Bloody” 5th got its name, click this link.