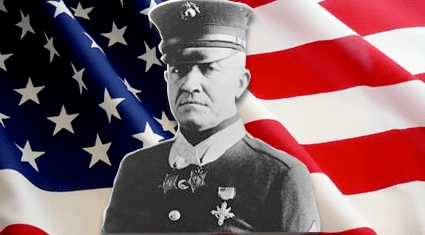 “The Fightinest Marine I Ever Knew”

The United States Highest award for “conspicuous gallantry and intrepidity at the risk of his life above and beyond the call of duty” is the Congressional Medal of Honor. In over 150 years only 19 men have won it twice.

One of the most legendary two time recipients is Marine Corps Sergeant Major Dan Daly. Here is the remarkable story of how he earned his Medals of Honor.

It was in China, 1900. Daly was part of the U.S. Embassy Guard in Peking when the Boxer Rebellion broke out. American diplomatic buildings were about to come under siege. Marine Private Dan Daly volunteered to man a barricade about 100 yards forward of the main line of Marines, a position known as the Tartar Wall.

If the Chinese rebels thought one man would be a pushover, they were soon to learn better.

Armed with a bolt-action rifle and bayonet, Daly spent the night beating back the attackers.  When more Marines arrived the next morning, they found Daly puffing on a cigarette, surrounded by bodies of the enemy. Marine Corps legend puts the number at around 200.

“Daly distinguished himself by meritorious conduct.”

Fourteen years later Gunnery Sergeant Daly would earn his second Medal of Honor serving in Haiti fighting against the Cacos.

While attempting to ford a river at night, his 38-man Marine unit was ambushed from three directions by hundreds of insurgents.  The Marines fought their way across the river, but lost their heavy machine gun in the river. Given the odds, that machine gun meant the difference between life and death.

Daly went back into the river, searching for the gun while the enemy surrounded their position.  He returned with gun and ammunition strapped to his back.

The Marines split into three teams and attacked.  As one man noted afterward,

“Had one squad failed, not one man of the party would have lived to tell the tale.”

A later report stated that Daly “was the most conspicuous figure.” He was awarded his second Medal of Honor.

But Daly was not finished being a hero yet. He is probably best remembered within the Marine Corps for bravery in World War I.  In June 1918 at the battle of Belleau Wood, the Marines were pinned down under heavy artillery barrage. The 44 year old Daly, led a counter-attack with a battle cry that has become Marines lore,

“Come on, you sons of Bitches, do you want to live forever?!”

Later in the battle, Daly single-handedly eliminated a machine gun nest armed with his 45 pistol and grenades. In the course of the battle he was wounded three times.

Daly was recommended for a third Medal of Honor, and was ultimately awarded the Distinguished Service Cross, the Navy Cross and France’s Médaille Militaire.

Major General Lejeune, Commandant of the Marine Corps, called him “the outstanding Marine of all time.”

Major General Butler the only other Marine to have earned two Medals of Honor,  called him “The fightinest Marine I ever knew,” and wrote that “it was an object lesson to have served with him.”

Offered promotion several times, Daly once remarked, “I would rather be an outstanding sergeant than just another officer”