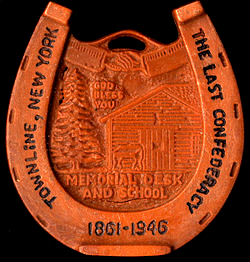 The story goes that in 1861 the hamlet of Town Line decided to secede from the Union, by a vote of 85 to 40. It wasn’t until 1946 that another vote was held about rejoining the United States. This time there were 90 votes to rejoin the Union. But 23 Rebels were still holding out and voted against it.

Thing is, Town Line is in New York, not too far from Niagara Falls. And the firefighters of Town Line still had a Confederate flag on their uniform patch until 2011. Americans can be a feisty lot.

The city of New York also had Southern sympathies. In January of 1861, its mayor Fernando Wood proposed that the city secede from the Union and form its own sovereign nation called Tri-Insula (meaning three islands).

NYC was a vital source of funding for Washington. About 90% of federal revenue was from fees on imported goods. And the lion’s share of those imports came into New York harbor. In 1959, the Port of New York accounted for nearly two thirds of all federal revenue!

So Mayor Wood figured that if the city left the Union it could support itself on a fraction of the high tariffs that the federal government charged. It could greatly reduce the customs fees, and not have to tax its own citizens.

The idea didn’t go very far, though the war was pretty unpopular with a lot of folks in the city.

Of course, this was the same city that raised the famous Union 69th Irish Regiment. The 69th was so brave in one battle that it was cheered by the Confederate 24thGeorgia Volunteers Irish Regiment.

The 69th lives on today in the New York National Guard 69th Infantry, which still uses the same flag. Its nickname is the “Fighting Sixty Ninth,” earned in the Civil War. It is reported that Robert E. Lee said, upon learning that the 69th on the field:

Both sides respected bravery in the other. The remark made its way back to the Union boys, and it has stuck ever since.