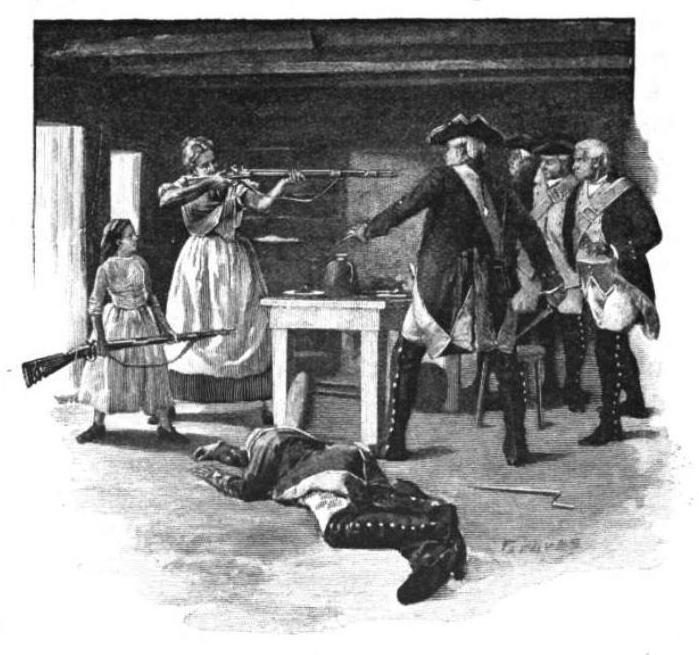 Here is the story of another brave woman of the American Revolution that deserves telling.

Nancy Hart was a tough and resourceful figure, a power to be reckoned with when it came to protecting her family. She had a hot temper, a fearless spirit, and the ability to deliver revenge when she or her children were threatened. Nancy was also a skilled hunter, and an excellent shot.

According to sources, “Aunt Nancy,” was tall, gangly, rough-hewn and rawboned, with red hair and a face scarred by smallpox. One early account said that Hart had “no share of beauty –  a fact she herself would have readily acknowledged, had she ever enjoyed an opportunity of looking into a mirror.”

But you don’t have to be good looking to help win a war.

As the story goes, Six British soldiers stopped at her cabin while they were tracking a Whig leader, demanding information about him. Although the man they were searching for had been there, she denied seeing anyone.

One of the Tories, certain she was lying, shot and killed Hart’s prized turkey, and then ordered her to cook the bird. When they entered the cabin, they stacked their weapons in a corner, and demanded something to drink.  Hart obliged them and served up some wine.

As the soldiers drank the wine, Hart sent her daughter to the spring for a bucket of water.  She secretly instructed her daughter to blow a conch shell, kept in a nearby stump, to alert the neighbors that Tories were in their cabin.

Hart continued to serve her unwelcome visitors and passed between them and their weapons. She was able to take the muskets and pass them through an opening in the cabin wall to her daughter, who had slipped outside to the rear of the house.  When the soldiers figured out what was going on, they scrambled to grab the weapons that were left.

Hart pointed a musket at them and gave a stern warning that she would shoot the next man that moved.  One man ignored her warning and made the fatal mistake of approaching her.  She held the rest off until her husband, Benjamin, and others arrived.

Benjamin wanted to shoot the remaining hostages, but Nancy insisted on hanging them instead.

Some say this was just a legend but….

As the story goes on – in 1912, workmen were grading a railroad near the site of the old Hart cabin. The men unearthed a neat row of six skeletons laid out under three feet of dirt. They estimated the remains had been buried there for a least a century. So, maybe there’s more truth than legend.

But those six Tories sure learned a hard lesson that day  –  Don’t mess with Nancy Hart!