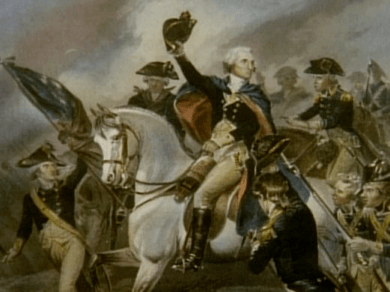 George Washington was known for keeping his cool, so it was rare that anyone saw him lose his temper. But at the Revolutionary War Battle of Monmouth in New Jersey, Washington exploded in rage when his second in command disobeyed orders and retreated from an engagement.

Washington had sent General Charles Lee ahead to engage British General Cornwallis while Washington brought his full army up from winter quarters at Valley Forge. But Lee withdrew from the fight after several hours.

When Washington met up with Lee, he cursed him furiously for withdrawing from the British. General Scott was there and said that the “leaves shook on the tree.”

Washington rode forward on his horse, encouraging his men to battle, and continued to do so throughout the day.  The day was so hot and Washington maneuvered around so swiftly – inspiring his men and directing the fight – that his horse died from exhaustion.

That night Washington resolved to continue the fight the next day, but when dawn came, the British were nowhere to be seen. They had retreated overnight.

Another of Washington’s generals, Marquis de Lafayette, was present at the battle, and later reported, “I thought then as now I had never beheld so superb a man.”