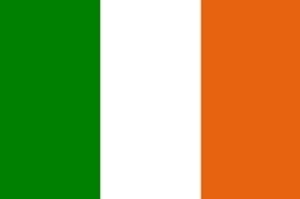 7 Amazing Facts About the Irish Flag

The Irish flag, also known to many as the Irish tricolor or Bratach na hÉireann in local dialect, is easy to mistake with several other flags for sale, like Italy’s or Ivory Coast’s. But after reading all the interesting trivia about it, people will remember it and have a renewed respect for the country, its history and the people who live in it.

1. The Symbol of the Aspiration for Lasting Peace.
The Irish flag is composed of three colors – green, white and orange. The green stands for the Gaelic locals, the majority of which believe in Roman Catholicism. The orange symbolizes the Protestants who emigrated to the northern part of the country in the 17th century. The two groups had a quite a long history of religious divide; so the white in the middle represents the truce they have agreed upon during the revolution and the peace they aim to have in the future.

2. The Golden Harp – Irish Tricolor’s Predecessor
The Irish flag has undergone many transformations over the centuries. Before the tricolor was adopted as the national symbol, a silver-stringed gold harp on a vivid green bed was the one used to represent the country. Up to this day, some organizations – even government offices – still make use of the gold harp in their emblems or coats of arms. However, this is ‘actively discouraged’ as it fosters the division past leaders fought to eradicate.

3. The Revolution which Ushered the Change
It was a young revolutionary leader named Thomas Meagher who had the distinct honor of waving the flag for the very first time in March 7, 1848 in the Wolfe Tone Confederate Club in Waterford City. It flew there proudly for several days before it was taken down by British Soldiers.

Aside from the social schism brought about by religion, the Great Famine was a catalyst for the rebellion of that year and, consequently, the national emblem’s make over.

4. The New World Order of 1848
This year saw many successful revolutions all over Europe. France, Germany and several other countries overthrew the monarchy and began the democratic movement. Thomas Meager tried the same in Ireland but failed. He was arrested for treason and sentenced to death, but exiled to Australia. Some time later, he fled and sought refuge in America where he became one of the toughest soldiers of the Union Army in the American Civil War. Before he went on trial, he vowed in front of a crowd that the Irish tricolor would be seen and used by their descendants in the future.

5. Adopting the Irish Tricolor
Meagher was proven right as more and more groups used the tricolor for their causes, particularly during the Rising when it flew over the GPO of Dublin and the Irish War of Independence. By 1937, the tricolor was adopted in the constitution.

The flag, an important physical representation of a country, should be treated with care and respect at all times. While the same is true with the Irish tricolor, there is one special rule about it. No other flag should fly over the tricolor because it is the truest symbol of the proud Irish people.