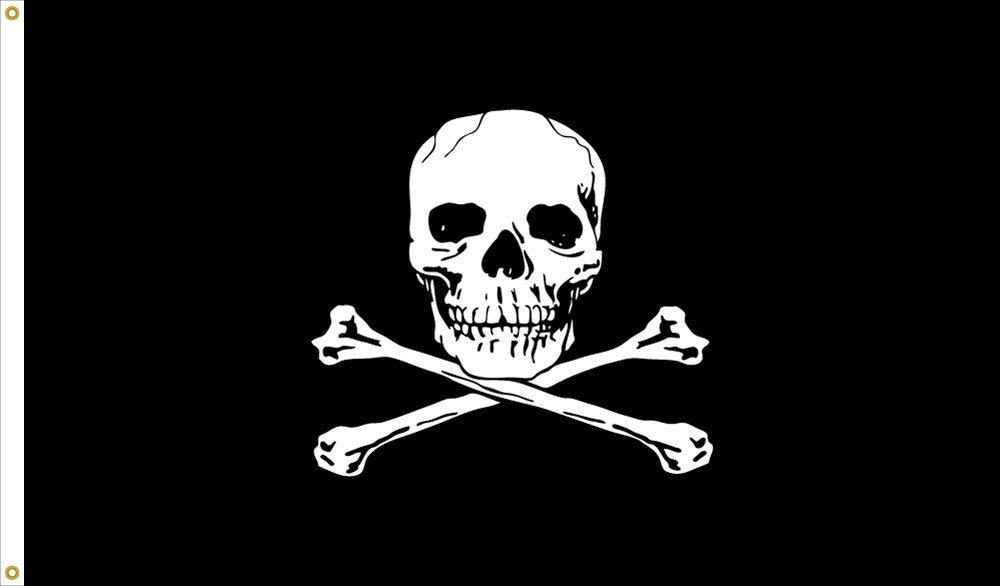 Pirates used flags as a psychological weapon. They were meant to strike fear into the hearts of sailors so that they surrender without much resistance. When we think of a pirate flag we imagine a black flag with a white skull and bones. This flag is known as the Jolly Roger. The skulls were meant to warn them of certain death if they didn’t surrender in time. It was indeed the most common flag used by pirates. But if you think that it was the only flag used by pirates you’d be wrong. Let’s look at 6 striking facts about the pirate flag that you probably didn’t know.

Flags were like brand logos for the pirates. Famous pirates didn’t use the common Jolly Roger flag with skull and bones (with the exception of Bartholomew Roberts who used it before it became mainstream). The pirates used flags with images of the captain toasting, piercing a heart, and an hourglass. One of the most famous pirates, Blackbeard, used a flag which depicted a skeleton piercing a heart with a spear while raising a toast to the devil. Pretty scary flag if you ask me.

#2
No Flag from the Golden Age of Piracy Survived

The golden age of piracy spans from the 1650s to the 1730s. During this period piracy in the western world came to the spotlight. The English and the French had set up colonies across many continents which meant they had ships full of cargo sailing across the high seas. Pirates attacked these merchant ships for the bounty and were pretty successful at it. Legends and myth grew around the most famous pirates of this era. Unfortunately, none of these famous pirates were ever caught sailing with their flags. In fact, we don’t even have a drawing of the pirate flag of this era by an actual eyewitness.

Flags were primarily used to put psychological pressure on the victims. Do you know what is scarier than being attacked by a pirate? Being attacked by a nation’s naval vessel. Many pirates used British and French flags to intimidate merchant ships into surrendering without a fight. Using a national flag also helped them get out of some pretty sticky situations. A famous pirate Bartholomew Roberts once fooled the French by Flying a Dutch Flag and pretending to be a slave ship. The French sent smaller ships with lots of money to trade slaves with this Dutch ship which Robert’s happily looted.

The pirate flag is said to have originated from the plain black flag that ships would fly to warn another to surrender at once. If the other ship didn’t surrender in time, a red flag would take the place of the black. This meant that no mercy would be shown to the crew. These flags were first used by French and English ships. Since most of the pirates of the golden age were mostly Ex-Naval men, they might have adopted the black flag and added their symbols to it.

#5
The Pirate Flag was NOT Always Raised

If you were the captain of a merchant ship you probably wouldn’t go near anything that had a black flag raised. That’s why pirates didn’t use their flags out in the open seas. The pirate flag was raised only when they were close enough to their victim that the ships couldn’t run for escape. They had to surprise the merchant ships by sneaking up close. Once they were close, they would raise the flag to intimidate the crew to an early surrender.

#6 Pirates Sewed the Flag on Their Own
A pirate couldn’t just walk into a market and buy a pirate flag. There were no pirate flags for sale even in the few nations where piracy was legal. So, the captain would have to ask one of his crew members who was good with a needle to sew a scary pirate flag for him. Who knew that apart from being a bunch of greedy and unsanitary people, the pirates also had sick sewing skills?