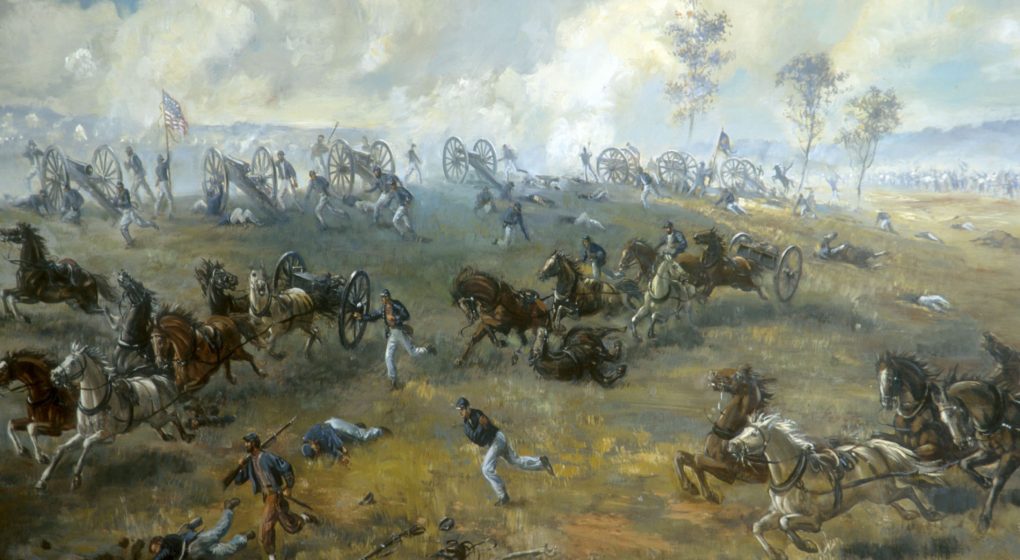 It was July 31st, 1861. Federal troops were just north of Manassas, Virginia. There were many who thought they would send the Rebels reeling, putting an end to the rebellion.

The day was Sunday, and a throng of civilian sightseers had come down from the U.S. capitol, just 25 miles away. Lieutenant Tibdall commanded a section of artillery at the battle, and described what he s

“They came in all manner of ways, some in stylish carriages, others in buggies, on horseback and even on foot…. All manner of people were represented in this crowd, from the most grave and noble senators to hotel waiters.”

Many had packed picnic baskets, and some enterprising folks brought carts of food to sell.

William Russel of the London Times was present. He tells us there was “an unusually heavy discharge of artillery. A lady with an opera glass who was near me was quite beside herself, exclaiming, ‘Oh my! Is not that first rate? I guess we will be in Richmond to-morrow.’ ”

A Federal officer rode up and hollered, “We have whipped them on all points.”

Some of the Sunday tourists wanted to get a closer look, and moved toward the battle. The group included four Senators and two Congressmen.

As they neared the battle lines, the road became filled with soldiers, horses, and wagons.

But they were going in the wrong direction!

Union soldiers hollered at the spectators, “Turn back, turn back, we’re whipped.”

Not all of the civilians were bright. Michigan Senator Zachariah Chandler tried to barrier the road in an effort to stop the retreat. Senator Ben Wade of Ohio picked up a rifle, threatening to fire on the fleeing soldiers.

It was useless. The retreat could not be stopped.

A Confederate shell destroyed the buggy of Senator Henry Wilson, and he had to escape on a mule. Iowa Senator James Grimes barely avoided capture (and swore he would never to go near another battlefield).

New York Congressman Alfred Ely got too close to the fighting and was captured by the 8th South Carolina Infantry. He succeeded in reaching the Confederate Capitol of Richmond, where he spent the next five months in prison.

The reality of war had begun to sink in.