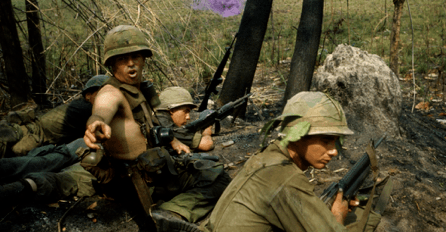 Staff Sergeant Jimmie Howard knew the fight was coming. His 18-man Marine reconnaissance unit was on top of Hill 488 in Vietnam as over 200 enemy soldiers began probing their position.

Howard had enlisted in 1950, had a Silver Star and two Purple Hearts for his actions in the Korean War, so he knew what to do when an enemy attacked. It was 10 o’clock that night when the enemy struck. The Marines pulled back to a 20-yard circle, and began fighting. In the dark, grenades and mortar shells exploded, and tracer rounds filled the air.

The enemy taunted them with, “Marines, you die in an hour.”  Howard’s men just yelled back. The Marines found this funny and began laughing. Howard described it:

“They were shooting at us and when we started laughing… they stopped.  There was complete silence.  I think it had a chilling effect on them.  They must have known we were terribly outnumbered, but here we were laughing at them.”

But soon the fight continued. The Marines were low on ammo, so Howard directed his men to, “Throw rocks.” As his men threw the rocks into the brush and grass, the enemy mistook them for grenades and moved into the open. That way the Marines could make every round count.

It was not until noon the next day that a Marine company closed on the hill.  By the time Staff Sergeant Howard and his men were relieved, they had just eight rounds of ammunition left.

Howard’s men were awarded four Navy Crosses and 13 Silver Stars. Every man earned a Purple Heart. Howard had been shot in the back, could not move his legs, but had continued to fight. He was awarded the Congressional Medal of Honor.

If that’s not courageous and heroic, then what is?