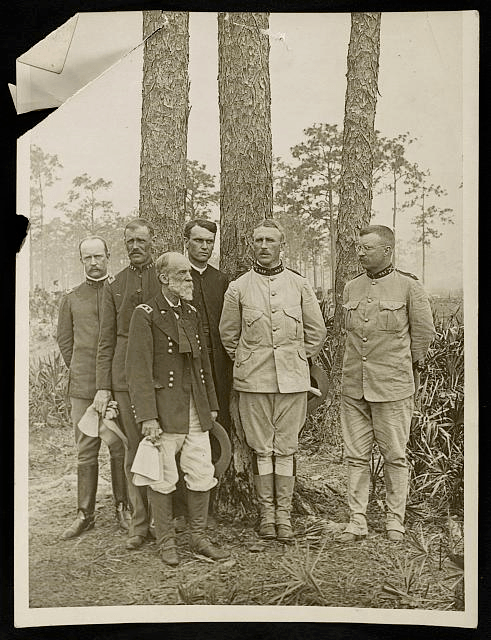 A Rebel General in a Yankee Army

“Fightin’ Joe” Wheeler has the distinction of serving as both a Confederate General in the Civil War, and later as a U.S. Army General. That’s him in the photo, in front of the others.

Joseph Wheeler graduated from West Point in 1859. After completing Cavalry School, he was posted to Fort Craig in New Mexico Territory. It was out West that he got his nickname.

2nd Lieutenant Wheeler was escorting a wagon that had a pregnant woman on board. Suddenly, marauding Indians attacked. The wagon driver and Wheeler were the only defense. Wheeler charged the attackers. With fire from both men, they managed to drive off them off. When the soldiers heard the story later, Joe became “Fightin’ Joe.”

Things changed the next year when Wheeler’s home state of Georgia seceded from the Union: he resigned his commission and joined the Confederate Army.

Due to his skills and success as a cavalry officer, Fightin’ Joe rose quickly up the ranks, becoming a major general by 1863. He had 16 horses shot out from under him, and was wounded three times. Robert E. Lee considered him one of the two finest cavalry officers of the war. (Lee was himself a West Point graduate, and had been commandant of West Point Military Academy.)

After the war, Wheeler settled down in Alabama and raised a family. In 1880, he was elected to the U.S. Congress, where he served many terms.

When the Spanish-American War broke out in 1898, Wheeler left Congress to volunteer in the Army. He was 61.

Assigned by the President to command the cavalry in Cuba, Teddy Roosevelt’s Rough Riders were under his command. You can see future President Roosevelt to the far right in the photo above.

“Fightin’ Joe” was aggressive, and his men fought the first major battle of the war in Cuba. When the Spanish began to retreat, Wheeler is reported to have hollered out, “Let’s go, boys! We’ve got the damn Yankees on the run again!” His adjutant had to remind him that he was one of the Yankees.

Wheeler came down with malaria, but was able to get up from his sick-bed in time to take command during the Battle of San Juan Hill.

After success in Cuba, Wheeler was sent to the Philippines, where he continued to fight in the Spanish-American War for over a year.

Fighting Joe Wheeler has been honored in various ways, including having a Liberty Ship and an Army base named for him. His statue stands in the Statuary Hall in the United States Capital building, and he is buried in Arlington National Cemetery.