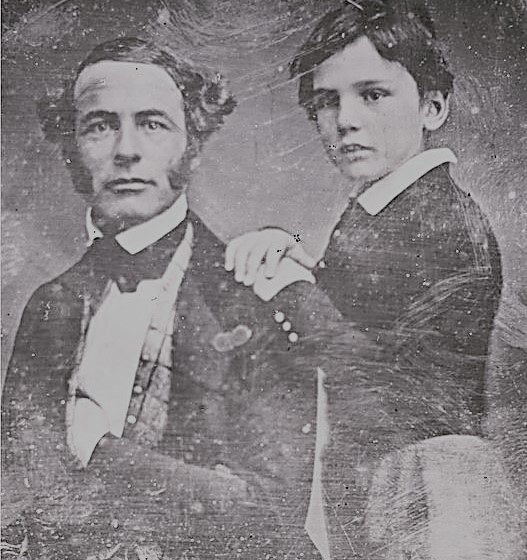 The photo you see above is Robert E. Lee with his son, in 1845. Someone asked me whether Lee ever regretted fighting for the South.

General Long worked alongside Lee. He wrote Lee said the following, a day or two before surrender at Appomattox:

“…I have never believed we could…make good in the long run our independence unless foreign powers should assist us…. But such considerations really made with me no difference. We had…sacred principles to maintain and rights to defend, for which we were in duty bound to do our best, even if we perished in the endeavour.”

Lee wrote to his sister after he resigned his commission in the United States Army:

“I have not been able to make up my mind to raise my hand against my relatives, my children, my home. I have therefore resigned my commission in the Army, and save in defense of my native State, with the sincere hope that my poor services never be needed, I hope I may never be called on to draw my sword.”

Today we talk of the great social issues of the Civil War – and they were grave!

But for the individuals it often came down to protecting the lives and homes of family and friends, or siding with those who might attack them.

Americans had much strong ties to their home states. There were still people alive who had been citizens of an American Colony, when each Colony had been independent of the others.

In a letter to a friend, Lee wrote:

“If Virginia stands by the old Union, so will I. But if she secedes (though I do not believe in secession as a constitutional right, nor that there is sufficient cause for revolution), then I will follow my native State with my sword, and, if need be, with my life.”

To quote from Winston Churchill:

“He was opposed to slavery and thought that, ‘secession would do no good,’ but he had been taught from childhood that his first allegiance was to the state of Virginia.”