This flag was used by vessels authorized by General George Washington in 1775. It is a variation of the New England Pine Tree flag with grass underneath. The Continental Navy was up against the greatest naval power in the world, and they set sail flying a flag with an “APPEAL TO HEAVEN.”

In September 1775 the Continental Army set up two floating batteries on the Charles River in Massachusetts. The next month they opened fire on the British in Boston. In October, Washington commissioned two schooners, the Lynch and the Franklin, to cruise the Bay. Colonel Joseph Reed, Washington’s military secretary, wrote a letter on October 20th:

“Please fix upon some particular color for a flag, and a signal by which our vessels may know one another. What do you think of a flag with a white ground and a tree in the middle, the motto ‘AN APPEAL TO HEAVEN’ – this is the flag of our floating batteries.”

By February, 1776, there were six “armed Vessels” of the “United Colonies of North America” that had been commissioned by Washington. In April 1776, the Massachusetts council passed regulations concerning the sea service, including:

“Resolved, that the uniform of the officers be green and white, and that the colors be a white flag, with a green pine tree, and the inscription, ‘An Appeal to Heaven’.” 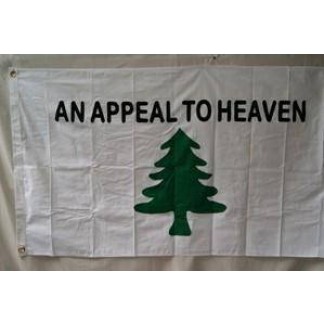