This is an American made flag of our toughest, most durable and long-lasting nylon fabric, with solid brass grommets. You won’t find nylon flags with higher tensile and tear strength, yet they fly very well in the wind. This flag has excellent strength retention under UV exposure, and high resistance to UV fading. The colors are deeper, brighter and last over time. This fabric has better wash-fastness and light-fastness than nylons of similar fabric construction.

There is a one inch double edge fold with four rows of stitching on the fly edge. There is reinforced stitching at the fly corners.

– Double the toughness of the “Standard Quality”
– Long lasting, waterproof, tear and fray resistant Nylon
– Designs are through-printed and visible on both sides
– Bright, fade-resistant inks
– Double and quad stitched edges all around
– Reinforced grommet holes with metal rings
– Attaches easily to any flag pole
RECOMMENDED USES:
– All-weather outdoor display use
– Permanent flag displays (not taken down at night/rain)
– Excellent for events indoor/outdoor
– Long term decoration use
– Commercial/professional use 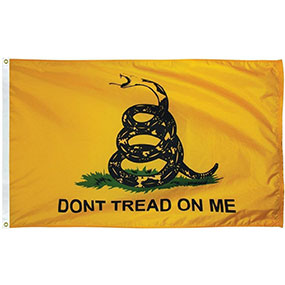