This flag is double-sided, in that two separate flags are sewn back-to-back. Printed Nylon is tougher than standard polyester. Perfect for flying in high winds!

All Weather Quality – Nylon printed
– Double the toughness of the “Standard Quality” in DOUBLE SIDED
– Long lasting, waterproof, tear and fray resistant Nylon
– Design is double sided (2 flags sewn back to back) and words read same on both sides, nothing backwards
– Bright, fade-resistant inks
– Double and quad stitched edges all around
– Reinforced grommet holes with metal rings
– Attaches easily to any flag pole
RECOMMENDED USES:
– All-weather outdoor display use
– Permanent flag displays (not taken down at night/rain)
– Excellent for events indoor/outdoor
– Long term decoration use
– Commercial/professional use

The United States Navy was preceded by the Continental Navy, and this flag is recorded as presented to its first Commander-in-Chief, Commodore Esek Hopkins, as his personal standard. In 1775 Christopher Gadsden was a member of the Marine Committee of the Second Continental Congress. This committee was responsible for outfitting the ships of the forming Continental Navy. This included originating a flag for the navy’s commander-in-chief, to fly as his standard from the mainmast of his flagship. It was this committee that decided Hopkins’ would fly a yellow flag with a snake and “don’t tread on me” on it.

The following is from the Journal of the South Carolina Provincial Congress, 9 February 1776: 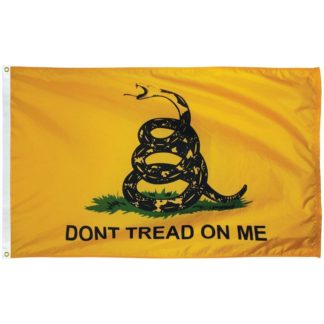