This Betsy Ross flag with embroidered stars is made in American of the strongest nylon fabric and solid brass grommets. It is fully sewn with embroidered stars, not printed. You won’t find nylon flags with higher tensile and tear strength. It has excellent strength retention under UV exposure, and high resistance to UV fading. These are deeper, brighter colors that last over time, due to the aniline dyeing process, with better wash-fastness and light-fastness than nylons of similar fabric construction.

You have not viewed any product yet. 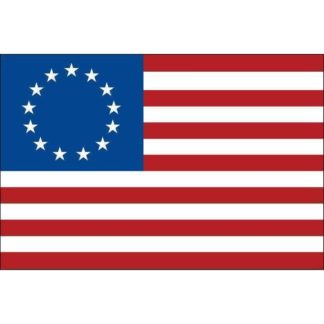