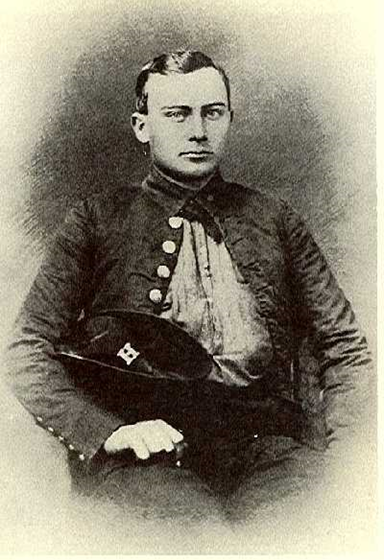 The last time I wrote about Sam Watkins, he got a Minnie ball through his new hat. That’s Sam in the photo above, but definitely not the same hat. (Sam was in Company H, First Tennessee Infantry).

Well, it seems the next day he was on picket duty on top of Missionary Ridge. That’s part of Lookout Mountain outside Chattanooga, Tennessee.

Sam watched a night battle at the base of the mountain: “It looked like lightning bugs on a dark night.”

Sam, Theodore Sloan and Hog Johnson were in an old log cabin, no sleep for two days, but had to stay awake since they “knew there was something up.”

Sure enough, “Johnson touched me and whispered, ‘Look, look, there are three Yankees; must I shoot?’”

Sam answered back yes, a shot rang out, and things were quiet for over an hour. Then Johnson whispered, “Yonder they come again; look, look!”

Sam was so sleepy he couldn’t see them, so Johnson fired again. But this time the Yankees didn’t drop back:

“The streaks of day had begun to glimmer over Missionary Ridge, and I could see in the dim twilight the Yankee guard not fifty yards off. Said I, ‘Boys, let’s fire into them and run.’ We took deliberate aim and fired. At that they raised, I thought, a mighty sickly sort of yell and charged the house.

Sam, Theodore and Hog raced away.

Now Sam was still on picket duty. This meant he was out in front of his own lines, and now the battle was heating up.

“I heard fighting and commanding and musketry all day long, but I was still on picket. Balls were passing over our heads, both coming and going. I could not tell whether I was standing picket for Yankees or Rebels.”

Sam got separated from the other two boys, and was now at the foot of Lookout Mountain:

“The Yankees were swarming everywhere… No one seemed to notice me; they were passing to and fro, cannon, artillery, and everything.”

You see, Civil War soldiers often dressed in whatever was available, so you couldn’t always tell by looking at a fellow which side he was on.

Soon he found himself at the foot of Missionary Ridge. The Yankees were ordered to charge up the ridge. Sam didn’t want to get shot as a “deserter,” so up the mountain he went:

“They kept climbing and pulling and scratching until I was in touching distance of the old Rebel breastworks, right on the very apex of Missionary Ridge.”

Sam knew exactly where he was. The Federals had pushed the Rebels back and halted. But Sam kept going:

“I ran on down the ridge, and there was our regiment, the First Tennessee, with their guns stacked, and drawing rations as if nothing was going on.

”Says I, ‘Colonel Field, what’s the matter? The whole army is routed and running; hadn’t you better be getting away from here?’”

“He remarked very coolly, ‘You seem to be demoralized. We’ve whipped them here. We’ve captured two thousand prisoners and five stands of colors.’”

Right then Confederate General Bragg and his staff rode up. Those fellows knew the day was lost:

“Bragg had joined the church, but he had back-slid at Missionary Ridge. He was cursing like a sailor.”

Orders were issued, and the 1st Tennessee found itself “at once the rear guard of the whole army.”

So it was that Sam lived on to fight another day.